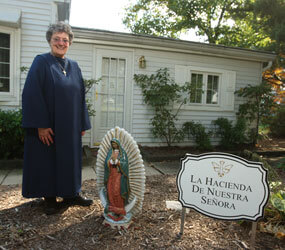 ESSEX – It once served as a fisherman’s shack on the banks of Norman Creek.

Today, the small home has been transformed into a refuge of a different sort – a holy place whose lone resident is heeding Christ’s call to follow him and be a “fisher of men.”

Our Lady of Guadalupe Hermitage is the home of Sister Maria Veronica of the Holy Face, a widow who is devoting her life to the ancient vocation of a hermit – someone who withdraws from the larger society to embrace a life of prayer and union with God.

Sister Maria Veronica publically professed her temporary vows of poverty, chastity and obedience during a Sept. 13 Mass celebrated by Archbishop Edwin F. O’Brien at the Basilica of the National Shrine of the Assumption of the Blessed Virgin Mary in Baltimore.

She is one of just two canonical hermits who minister in the Archdiocese of Baltimore. After a period of time under her temporary vows, she will eventually take her final vows.

Standing inside her hermitage’s newly established chapel, erected in the same room where her husband of 39 years lost his battle with cancer, Sister Maria Veronica said she finds joy in her new vocation. It’s a quiet and disciplined life of constant prayer.

“Prayer has a major impact,” said Sister Maria Veronica, who regularly consults a book of prayer intentions filled with requests ranging from help in finding a job to healing for illnesses.

“I’m just the middleman,” she said with a laugh. “A lot of people don’t think they can ask for a miracle. I never hesitate.”

A lifelong Essex resident who attended Our Lady of Mount Carmel Elementary School, Mary Zimmerer knew from an early age she was meant for the religious life. She was ready to leave to become a Sister of St. Joseph in Missouri at age 12, but her mother wouldn’t let her after Zimmerer’s grandfather suffered a stroke.

Zimmerer eventually married and raised a son, but she always felt religious life tugging at her heart.

She became a lay member of the Secular Third Orderof Discalced Carmelites, serving two terms as president. She was involved in bereavement ministry and volunteered at Stella Maris Hospice in Timonium. Zimmerer also received professional training in spiritual direction and began working with people of all ages.

After her husband, John, died in 2006, Zimmerer began informally leading a hermit’s life before approaching the archdiocese and undergoing formation for a vocation that traces its Christian roots to the desert fathers.

Sister Maria Veronica has special permission to have the Blessed Sacrament present in her chapel, which also houses a relic of Blessed Francis X. Seelos, religious icons, a large crucifix that once hung inside Our Lady of Mount Carmel, handmade Stations of the Cross and other spiritual reminders.

A hand-stitched sign given to her as a gift proclaims, “ShhhZZZ. I’m talking to God.”

The hermit rises at 5 a.m. each day. She prays the morning prayers of the church before leaving for Mass at St. Clement Mary Hofbauer in Rosedale, Our Lady of Mount Carmel, St. Clare in Essex or other area parishes.

Because a hermit’s vocation is devoted to solitude, Sister Maria Veronica does not have much contact with the outside world. She still sees family members and may talk on the phone, but those interactions are limited.

“God works in silence,” Sister Maria Veronica explained. “You don’t hear a crash and a bang when the stars come out. Hermits hear God working. We’re aware that the grass is growing.”

Sister Maria often prays for the intentions of Archbishop O’Brien and asks God for more religious vocations. Her newborn grandson, John Maximilian Zimmerer, is also frequently in her prayers.

“Hermits’ prayers are not for solitary spiritual gain,” he said, “but for the good of the Church and all of humanity.”

John Zimmerer Jr., Sister Maria Veronica’s son, said his mother is “completely at peace” in her new vocation. The biggest adjustment has been not getting to see her at family gatherings – especially during the holidays.

“My wife and I, and now our son, only get together with my mother privately, and much less frequently than before she entered the process to become a hermit,” he said, “but that makes our time together that much more special and cherished.”

A garrulous woman who loves people, Sister Maria Veronica said she has found a deep joy in her vocation.

“I’m so content it’s pathetic,” she said with a booming laugh. “A hermit is with the Lord the entire time. How could you not be happy?”

What is a canonical hermit?

Canonical hermits are men or women who live separated from the world and who dedicate their lives to silence, solitude, prayer and penance. Also known as “diocesan hermits,” they take public vows of poverty, chastity and obedience. They may wear distinctive garb and use religious names. With the permission of their bishop, they sometimes have the privilege of reserving the Blessed Sacrament in their hermitages.