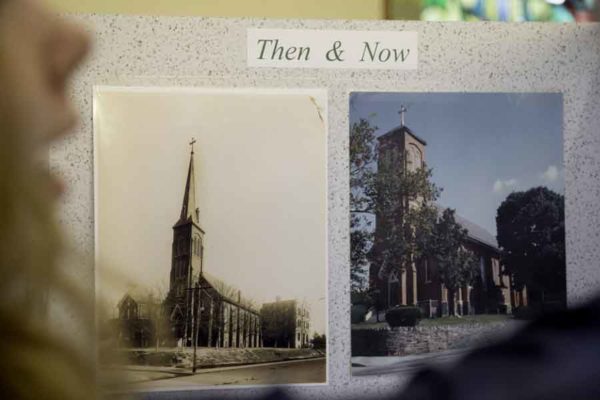 A historical display is shown at the May 14 150th anniversary celebration of St. Thomas Aquinas in Hampden. (Olivia Obineme/Special to the Review)

HAMPDEN – Squirrels skittered around the well-maintained but unfussy grounds. A small statue of the Blessed Virgin Mary, subtly nestled near a hedge, sported a crown of fresh flowers.

Even before parishioners arrived for the parish’s 150th anniversary Mass May 14, signs of life were apparent at St. Thomas Aquinas.

Inside, behind the last row of pews, a well-worn crib is a receptacle for donated baby clothes and items, a sign of the parish’s long commitment to the Center for Pregnancy Concerns, a pro-life pregnancy center with four locations in greater Baltimore.

Parishioner Christine Barrasso sat in a pew as she waited for Mass to start.

“It’s a great jewel in Hampden, it really is,” she said.

Its cornerstone laid in 1867, the church is classic, understated and reverent – in a mural behind the statue of St. Thomas above the altar, two angels genuflect to the Eucharist – but Barrasso was not talking about the building.

She had been searching for a parish that could accommodate her mother, who used a walker.

“Monsignor Farmer welcomed us,” she said. “That warmth is still here. It feels like home.”

The archbishop said in his homily that Jesus is both the cornerstone and a living stone on which the church is built, but he is not the only living stone.

“Each of us is called by baptism to become living stones in this temple,” Archbishop Lori said. “We are called not only to be the living stones that build up the church, but also, through baptism, you and I are called to be a priestly people, a people who offer our lives as a living sacrifice to God in the Holy Spirit – lives of goodness, virtue, commitment and love.”

The priestly people of St. Thomas look to, of course, priests for guidance and examples.

“We’ve always had wonderful priests who have served the community, been extremely involved and have given a God-like image,” said Joan Leyrer, a St. Thomas parishioner for 42 years.

She singled out the late Father Milton Hipsley, pastor from 1984 to 1992, for his “gentleness of soul.”

Father Kim, she said, has lived frugally to benefit the church and is “the most unselfish person.”

The sentiments are reciprocal.

“The people have definitely been very dedicated to this church; that has been very evident,” said Father Kim, who also celebrates a Sunday Mass in Korean at 1 p.m.

“This is a faith community that volunteers for everything,” Monsignor Farmer, now pastor of St. Thomas More in Baltimore, concurred. “The spirit of this parish is unbelievable.”

It was a literal act of God that led to the establishment of St. Thomas.

According to a history posted in the church during the anniversary Mass, worshippers initially met in the mid-1800s on the estate of Hampden developer Martin Kelly, a piano serving as makeshift altar.

One stormy day in 1866, it was not possible to have Mass at the estate – no reason specified in the history – so three men from the group set out for Immaculate Conception Parish, approximately three miles to the south.

When they turned around, however, they were unexpectedly met by two women from the same worship group, who would not be persuaded to turn around. The men felt that they had no choice but to accompany them onward.

Soon after the adventure, the Kelly estate group – which had originally been established as a Mass station from St. Mary of the Assumption in Govans – petitioned Archbishop Martin John Spalding for their own parish.

The archbishop obliged, and an archdiocesan administrator, Father Thomas Foley, laid the cornerstone. The first parishioners were so grateful to Father Foley for his administrative help that they took his patron, St. Thomas Aquinas, for their own.

The parish’s community spirit thrives to this day.

“I’ve always looked forward to the feeling of belonging, and now it’s seeing all the changes – all the younger people, and all the babies,” said Peggy Redmiles, a parishioner of St. Thomas for 68 years who also attended the parish school, which is closing permanently in June after serving the community for nearly 140 years.

In addition to its outreach to the Center for Pregnancy Concerns, St. Thomas is a big contributor to a local food pantry serving north Baltimore. The parish also hosts Narcotics Anonymous meetings for individuals and families who suffer from addiction, first-hand or otherwise.

Following the anniversary Mass, parishioners celebrated with a picnic.

The day was another anniversary, marking 40 years since Archbishop Lori’s ordination to the priesthood.
“I’m doing on my 40th what I love to do the most – celebrating Mass, spending time with God’s people and sharing the joy of the Gospel,” the archbishop said.