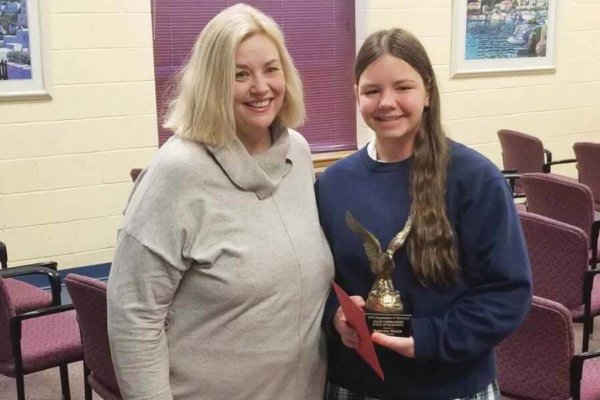 GLYNDON – The Veterans of Foreign Wars (VFW) received more than 132,000 entries for its Patriot’s Pen essay contest, but Karolina Mazur’s essay stood out above the rest.

An eighth-grader at Sacred Heart School in Glyndon, Karolina was named the 2017-18 national first-place winner. The theme was “America’s Gift to My Generation,” and Karolina defined hers as freedom.

She described her gratitude to the military for making sacrifices to protect her freedom.

“Freedom is a precious gift, an inheritance. Each generation of Americans has a moral obligation to our children to be good trustees of this great inheritance and pass on a stronger country to the next generation.”

Combining awards won at local, district and state levels, Karolina has accrued $6,400, including $5,000 from the national prize, which will be put into her college fund.

Karolina received an all-expense paid trip to Washington, D.C., where she met the 53 finalists for the Voice of Democracy scholarship, the VFW’s essay contest for high school students. They toured the White House, Mount Vernon and Arlington National Cemetery, and visited numerous museums. At the VFW’s Legislative Conference March 5, Karolina read her winning essay to more than 500 attendees.

Donna Russell, a language arts teacher at Sacred Heart for 10 years and a parishioner of St. Joseph in Sykesville, had all of her students – including Karolina – submit entries to the competition after the local chapter of the VFW contacted her.

“It’s important to realize what gifts America has given us and how important our freedoms are that we have in this country,” she said.

The teacher encourages her students to participate in other contests, as well, because it gives the students “something to write for.”

Karolina’s parents, Chris and Rick Mazur, said that she is no stranger to writing, and that she enjoys keeping journals and creative writing when she is not practicing for competitive swimming or playing the violin.

The Mazurs adopted Karolina from Poland at 22 months old, and said the United States has many opportunities to offer their daughter.

Parishioners of Sacred Heart for more than 25 years, the Mazurs immersed Karolina in the Catholic faith as soon as they brought her home. Now, Karolina is an altar server.

Karolina will attend Mount de Sales Academy in Catonsville in the fall, and said that when she shadowed, it “felt like home.”

“Her religion is important to her,” Rick Mazur said, “and that’s why we want to stay in a Christian, Catholic high school.”

An animal lover, Karolina wants to pursue a career in veterinary medicine.