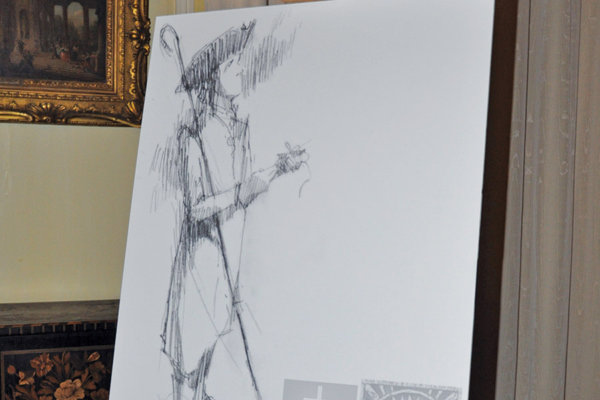 A drawing of John Carroll as a student at the College of English Jesuits in Saint-Omer, France, will be the basis of a sculpture to be created by artist Marine de Soos. (Ann M. Augherton/Special to the Review)

As boys growing up in the American colonies, Daniel, John and Charles Carroll had it better than most. They came from affluent families – families considered, in a later book, “Princes of Ireland, Planters of Maryland.”

In the early 1700s, Protestant settlers in Maryland had overtaken the Catholic settlers, and made the practice and teaching of the Catholic faith in the colony nearly impossible. In response, some Catholic families decided that the only way to ensure a solid foundation for their boys was to send them abroad.

Daniel Carroll of Rock Creek, born in 1730 and one of only five people who signed both the Articles of Confederation and the U.S. Constitution, first arrived at the College of English Jesuits in Saint-Omer, France, in 1742 and studied there for six years.

Daniel’s brother, John Carroll (b. 1735), and cousin, Charles Carroll of Carrolton (b. 1737), followed in 1748. John became a priest and eventually was named the first bishop in the United States in 1789 when the Diocese of Baltimore encompassed the original 13 colonies. Charles was the only Catholic to sign the Declaration of Independence.

In “Lands of Promise: From Saint-Omer to Maryland,” a book in English and French, Clarisse Cervoni notes, “Throughout their education, including at the College of English Jesuits of Saint-Omer, the young Carrolls adopted the humanistic vision of their peers, which would later incite them to defend their rights and the modern democracy to come, and to finally achieve what their Irish ancestors fled their lands for.”

At the official opening of the Chapel of the Jesuits as a new secular arts and performance space in Saint-Omer Oct. 14, Baltimore Archbishop William E. Lori noted the school held a great place in the formation of his predecessor Archbishop Carroll.

“He recognized that one of the greatest needs for the Catholic community (in the United States) was schools and this is why one of his first major initiatives was the establishment of Georgetown University. When drawing up plans for the college, it is clear that he modelled the program after Saint-Omer,” the archbishop said.

That dedication to education continues in the Archdiocese of Baltimore, where schools provide a potential turning point in the lives of students, not just for the affluent.

As with the Carroll families of centuries past, families today make the sacrificial choice to enroll their children in Catholic schools for the top-notch educational standards and the chance to be immersed in a values-based curriculum.

The recent recognition of four schools in the archdiocese as National Blue Ribbon Schools of Excellence attests to the high quality of our Catholic schools. Overall, 15 of our schools have received this recognition since 2010, and 25 since the program started in 1982.

Gone are the days when a Catholic education was not allowed in Maryland. As we embrace the present options for Catholic education, let’s also look to the future to ensure that many more students – from affluent families or not – have the chance for an education that prepares students to contribute well to society in the generations to come.