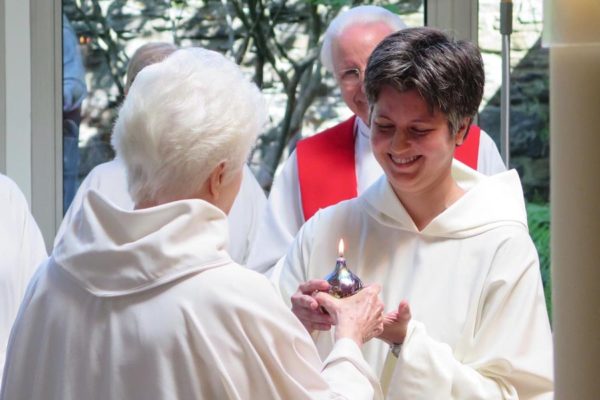 Carmelite Sister Celia Ashton participates in a May 15 liturgy at the Carmelite Monastery in Towson during which she made her profession of temporary vows. Also shown are Carmelite Sister Constance FitzGerald and Monsignor Joseph Luca, pastor of St. Louis in Clarksville and a longtime friend of Sister Celia. (Courtesy Diane Barr)

It was on her 30th birthday when Celia Ashton first stepped inside the monastery of the Carmelite Sisters of Baltimore.

A successful dentist who had long harbored thoughts of becoming a religious sister, Celia had been invited to attend Mass at the monastery by some of her patients who happened to be Religious Sisters of Mercy.

As Providence would have it, the day she picked to attend Mass at the monastery was Vocations Sunday.

“I remember thinking, ‘Okay, God, you’ve got my attention now – I’m really listening,’” Celia said with a hearty laugh as she sat inside the historic monastery, located on Dulaney Valley Road.

“There was something special here,” she remembered. “I just felt a deep peace and a sense that I was being called to this particular place – but I couldn’t understand it because I didn’t know anything about the Carmelites.”

Three years ago, the Baltimore native entered the Carmelites. The Seton Keough High School alumna professed her temporary vows of poverty, chastity and obedience May 15. She has taken the religious name of Sister Cecilia of the Cosmic Christ – though most people refer to her simply as “Sister Celia.”

It wasn’t easy to give up two flourishing dental practices and take a leap into the unknown, the 39-year-old nun said, but it has deepened her relationship with Christ and brought “great joy.”

Carmelite spirituality is focused on intimacy with God through contemplative prayer – both in solitude and in communion with the other sisters. As Sister Celia explained it, the sisters “give witness” to the primacy of Christ through a life of prayer.

“We live trusting and believing that our prayer makes a difference,” she said, “though we rarely see or know the impact of our life’s work.”

The seeds of Sister Celia’s call to religious life were planted early. When she was 11 or 12, the future nun pulled out the official directory for the Archdiocese of Baltimore and flipped to the pages listing all the women’s religious orders that served here.

Then a parishioner of St. Mark in Catonsville, where she attended the parish school and was active in the youth group, the young Celia wrote letters to every religious community she could find – asking for more information about becoming a nun.

Celia and her two younger sisters had plenty of good role models for what it means to give one’s life completely to God. Two of her aunts were Sisters of Mercy (Sister Susanne Ashton and Sister Frances Demarco). Another aunt was a Franciscan Sister of Philadelphia (Sister Mary Alice Ashton).

“We would go and visit them and we got to experience a little of what their life in community was about,” she remembered. “It would always be a really great experience.”

As her career in dentistry took off, though, the idea of entering religious life receded. It was attending Mass at the Carmelite monastery that reawakened it.

Sister Celia is the youngest of 16 nuns from four countries who live at the monastery. Following in the tradition of St. Teresa of Avila, the great 16th century Spanish mystic who reformed the order, the community is intentionally kept small so all members can be friends.

After living by herself for so many years, Sister Celia said it was definitely an adjustment to live in community. Married people get time away from each other when one or both go off to work, she said. That’s not the case in contemplative religious life.

“Here, if you rub shoulders with somebody, you could be sitting next to them at your next meal,” she said with a smile. “There’s a lot of growth that happens and you recognize your own rough edges and that we’re called to love one another and to support one another.”

Being able to live and interact with people in religious life she would not otherwise meet is also uplifting, she said.

“We make a radical choice,” said Sister Celia, who is expected to make her final vows in three years. “Every time we come together to celebrate the Eucharist, there’s incredible joy in that. We are witnessing to God’s love for all God’s people.”

For other women considering the religious life, Sister Celia has some advice from St. Katherine of Siena: Set aside fear. Trust in God.

“Be open,” she said. “Stay close to Christ, and never let an opportunity to practice charity pass you by.”