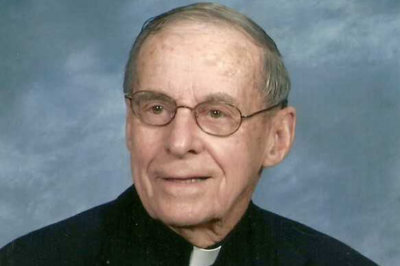 Josephite Father Charles Moffatt died Aug. 7 at Stella Maris in Timonium. He was 92.

A Detroit native, Father Moffatt was educated in his parish school of Nativity of Our Lord Catholic Church and then at St. Anthony High School and the University of Detroit. A World War II veteran, Father Moffatt served seven months in Germany as a Corporal with the U.S. Army Infantry and earned the ETO, Rhineland Campaign medal.

Father Moffatt entered St. Joseph’s Seminary in Washington, D.C., in 1951, and was ordained to the priesthood in 1957.

After serving for two years at St. Francis Xavier as his first assignment, Father Moffatt served in Texas, Louisiana, Michigan, Alabama and Washington, D.C. In failing health, he moved to St. Joseph’s Manor in Roland Park in 2014.