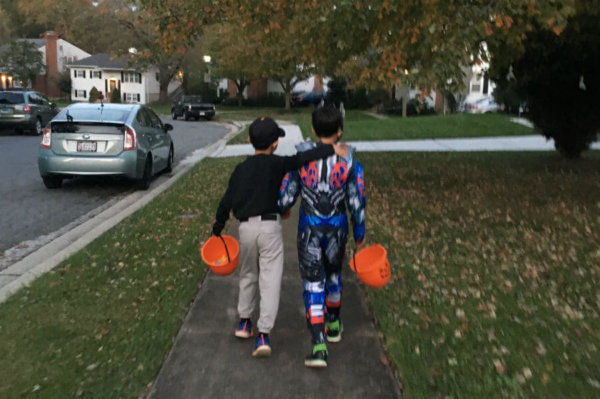 It’s November! How did that happen? I am hearing people mention Thanksgiving as if it’s just around the corner. And it might actually be. So it’s good that I already know what I’m bringing for Thanksgiving dinner: the turkey-shaped butter. 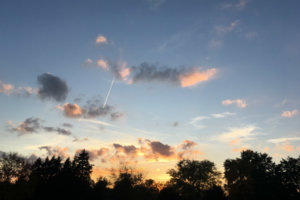 We had our last soccer practice of the season this week. Do I sound sad? No, no, I don’t. But I’m not as relieved and overjoyed as I thought I might be.

We have had fantastic soccer weather, and both our boys have loved the soccer season. They’ve learned a bunch, played as well as they could, and they have had kind, low-pressure coaches. And we have a carpooling friend for one of the boys now. Carpools are life-changing. And soccer season? I’d do it all over again—next year.

Even though practices are over, we still have a game this weekend and next. Can we pretend I’m not rooting for a rain-out on Saturday? One child has a game that is on the other side of the beltway. Bring on the rain! 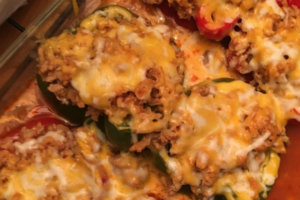 One of my favorite dinners at this time of year is the stuffed peppers we started making a few years ago.

They’re full of ground chicken and a little rice and a few other good things. They’re just right for the fall. Of course, after I cooked them, I expected them to last all week, and we only made it through two nights.

It’s definitely crockpot season, though. I need to dig up some of my crockpot recipes. But you can make the stuffed peppers using this recipe.

I had a work meeting in the middle of the day on Halloween, and I was afraid I wouldn’t make it to the school Halloween parade in time, but I did. And I got to see Daniel marching in his baseball uniform.

Even though I kept calling his name and waving, he didn’t pay much attention to me. He was too busy chatting with a classmate in the parade. He finally gave me a cheerful wave and went right back to his conversation.

That night I just had to ask. “Who was that girl in line with you?” I said. I was sure he would say, “What girl?” I was wrong.

“Oh, that’s Sally,” he said. “She sits near me in class. She was dressed up as Goldilocks. She’s really nice.”

And I’m sure she is. 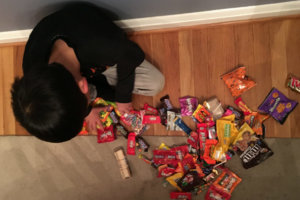 We had one of our best Halloweens ever. I only bought one costume—Optimus Prime—since Daniel wanted to wear his baseball uniform, the one he already owned.

Everything just fell into place this year. I remembered to take photos of the boys in costume before it got too dark. We went trick-or-treating all over the neighborhood. People were friendly, the treats were everywhere, lots of houses were well-decorated, and even the few tricks we encountered were fun.

When we returned to our house, there was still candy in the bowl we had left on the porch.

Then our boys dumped their candy on the floor, sorted it, and started their trading. It took me right back to my childhood.

I hope you had a happy Halloween, too. 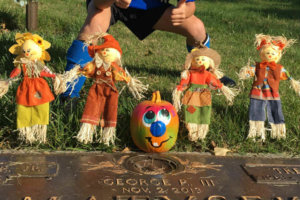 Halloween is also the anniversary of the day our nephew and cousin Georgie died four years ago. So this past weekend we went to make sure his grave was looking good. Daniel had picked out four scarecrows for Georgie’s two sisters and two brothers, so he set them up with a pumpkin.

Halloween will always be a happy and sad day to me. I remember how when I was breaking the news to Leo that day, he was wearing his Darth Vader costume. We still had a whole evening of trick-or-treating ahead of us, and I couldn’t fathom how we were going to get through it. But we did.

Somehow God gives us the strength and grace to deal with difficult moments.

Next week our older son is turning 10! I can’t believe it. But I need to believe it because somehow we have to get some gifts purchased and wrapped, we have cousins coming into town, and he’s going to be a whole year older and wiser.

He’s pointed out to me that it’s his golden birthday, as he turns 10 on the 10th. I have only myself to blame for teaching him this birthday fact. I just hope the festivities will be golden enough for him.

Read more quick takes at Kelly’s blog, This Ain’t the Lyceum. Have a wonderful weekend!