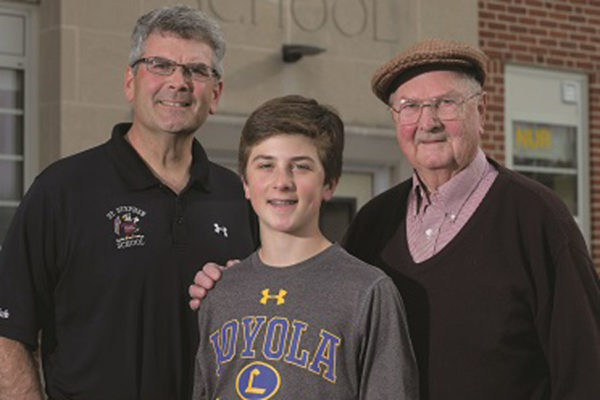 When Keegan Preis walks down the aisle at the graduation ceremony for St. Stephen School’s class of 2017 in June, it will be a bittersweet moment for his family.

Keegan is a third-generation graduate, ending – for now – the long list of Preis students who have walked the halls of the parish school in Bradshaw over the past seven decades.

Their father, Kyrle Jr., 86 and a daily Mass attendee at the parish with his wife, Dolly, since they retired in 1988, graduated from St. Stephen when it had a high school, in 1952.

“I place tremendous value on my education,” said Kyrle III, who went on to The John Carroll School in Bel Air. “I have a bachelor’s degree and a master’s degree, but I think that my primary and secondary education was really the most important to me. What my father and mother did, what sacrifices they made in life for me to go to school – I will never be able to repay them.

“Catholic school is more than just a uniform. It prepares you for life and teaches accountability and responsibilities. My kids have a certain awareness and understanding of how special their education is. They are thankful that we have been able to provide them with a Catholic education.”

Kyrle III said the physical footprint of the St. Stephen campus is pretty much the same since he attended in the 1970s, but there have been many infrastructure and technology upgrades, such as air conditioning, smart boards, laptops and WiFi.

“It hasn’t changed, but it has changed,” said Kyrle III, president of the St. Stephen Fathers’ Club, which has been responsible for helping to fund many of the upgrades. “I’m happy to be a part of such a great group of men. It is a blessing that they are so dedicated to the school and have been able to raise hundreds of thousands of dollars in addition to numerous in-kind services.”

Kyrle III, assistant chief of the Baltimore County Fire Department, believes that St. Stephen, which is celebrating its 85th anniversary this year, has thrived because of its family-like atmosphere, as well as the quality of education it delivers.

“We are blessed for the product we can offer at an attractive price point,” Kyrle III said. “We work hard to make the tuition affordable. Our motto is Faith, Values, Education. That is what St. Stephen is all about. I always say, St. Stephen looks out for us.”

“St. Stephen School has a long tradition of drawing families into the parish life and community,” she said. “Most of our current families acknowledge a connection with a former neighbor, family member or friend who attended St. Stephen School and continues to sing its praises.

“What a wonderful testimony to the Sisters of St. Francis and the numerous dedicated teachers who taught (here).”

Keegan will join Kyrle IV at Loyola Blakefield, but their father said, “St. Stephen will always be a huge part of my life. It’s home. I feel comfortable there – as comfortable as I feel in my mom and dad’s house.”

“We are hopeful that one day we will have grandchildren who will be there,” he said. “I absolutely will always be involved with the Fathers’ Club. We have a whole lot more to accomplish.”

Lisa Harlow is a freelance writer for the Catholic Review. A Baltimore native, Lisa has more than 20 years of experience in journalism and public relations and has been honored by the Maryland Delaware D.C. Press Association and the Public Relations Society of America.

Lisa is graduate of The Catholic High School of Baltimore. She holds a master's degree in professional writing from Towson University, and she is a parishioner of Our Lady of Mount Carmel in Essex, where her son attends school.