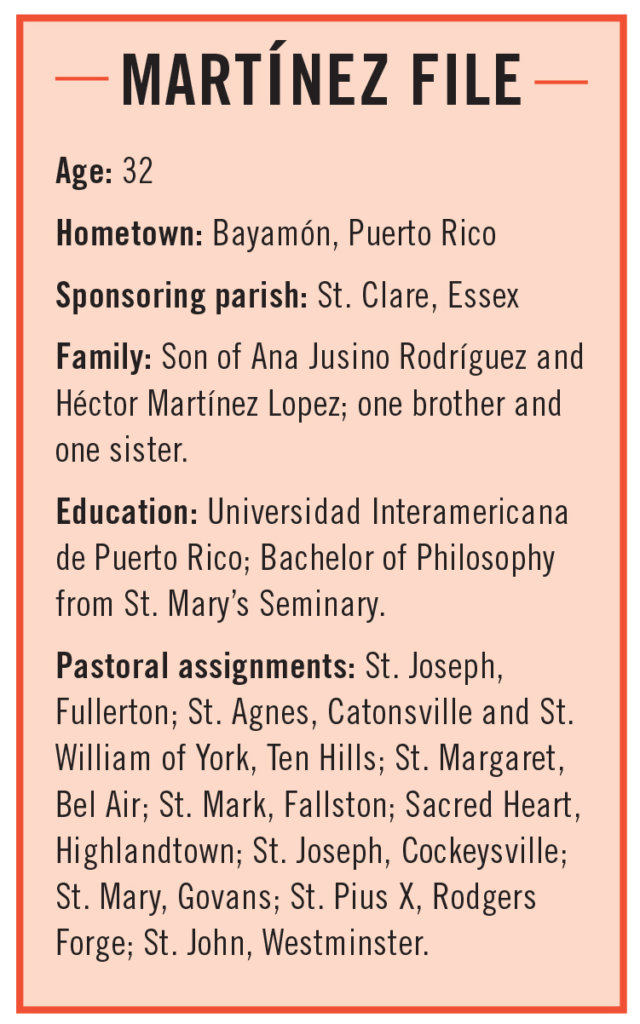 As a teen, Deacon John Martínez  refused to receive the sacrament of confirmation, a shock to the parents and grandparents who had taken him to Mass at Sagrado Corazón church in his native Bayamón, Puerto Rico, since he was a child.

“I rebelled against my family and used the church as an excuse” he said. “If they wanted me to do X, I would do Y. I also thought that church was for old people, not for me.”

This rebellion was not always the case. Deacon Martínez served as an altar boy and was fascinated by the ritualistic nature of the Catholic Church. He observed the priest during Mass and wanted “to do as he did.”

His abrupt rejection of faith was more than just a way of defying his family. Deacon Martínez also had what he called an “unconscious wish” to run away from  thoughts of becoming a priest.

“It was always there,” he said, “but I was indisputably choosing to ignore it.”

Other reasons prompted him to avoid a priestly vocation, such as his mother Ana’s concern about his financial future and societal pressure to “go with the flow.”

After high school, Deacon Martínez studied airport management in Puerto Rico before deciding in 2006 to move to the United States, where his mother, stepfather and siblings lived. He settled in Baltimore, found work as a janitor at Overlea High School and started attending St. Clare in Essex.

“I begrudgingly went (to church) the first time,” he remembered. “It was mainly to get rid of this couple who kept inviting me to go with them. In hindsight, that was the push that I didn’t know I needed.”

Deacon Martínez became an important part of his church community in several ministries, and parishioners kept telling him that he would be an excellent priest. When the subject arose, conversations with his family were now serene. He finally was confirmed, by Bishop Mitchell T. Rozanski, then-auxiliary of Baltimore.

In 2010, during a Mass for Our Lady of Guadalupe celebrated by Father Héctor Mateus-Ariza at the Basilica of the National Shrine of the Assumption of the Blessed Virgin Mary in Baltimore, he confirmed his call while listening to the homily, which focused on the Blessed Mother and how she called her children to serve Jesus.

“The Holy Spirit was present in the words of Father Héctor,” Deacon Martínez said. “In a church filled with a thousand people, I felt he was talking directly to me.”

He immediately contacted the archdiocesan Office of Vocations and moved to the House of Discernment at St. Matthew in Northwood. In 2011, Deacon Martínez started his priestly formation at St. Mary’s Seminary and University in Baltimore.

Deacon Martínez has high hopes for Catholicism in Baltimore and is determined to accompany young adults in their faith journey. More importantly, he wants people to understand that, just like his church family encouraged him to follow his vocation, every Catholic should promote vocations to the priesthood within their own family.

“My hope,” he said, “is that if I approach you and your children, you’d be open to pray with me for them to consider joining the church as servants of God. Do not be afraid.”

Archbishop William E. Lori will celebrate the ordination Mass at 10 a.m., June 23, at the Cathedral of Mary Our Queen in Baltimore. All are invited.

Retired from the Navy, Deacon William Keown is excited about new role as priest