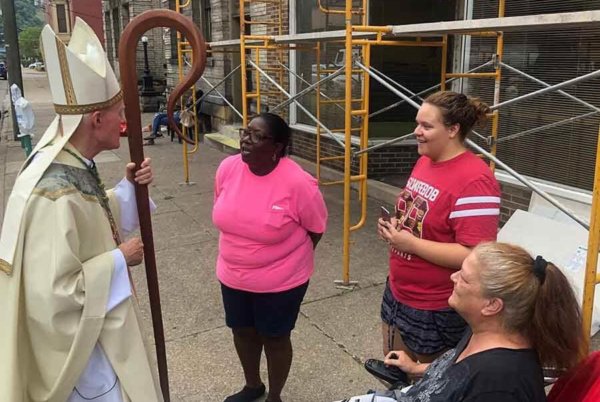 Bishop Mark E. Brennan greets Yvette Smith (from left), Kiara Moore and Carrie Chambliss, neighbors who live across the street from St. Joseph Cathedral in Wheeling, after his Mass of installation Aug. 22 as the ninth bishop of Wheeling-Charleston. (Christopher Gunty/CR Staff)

Bishop Mark E. Brennan’s crosier was created for him by a Maryland carpenter, Deacon Dave Cahoon of St. Mary’s Parish in Barnesville, Md., who also crafted the altar and furniture for Masses celebrated in Washington, D.C., by Pope Benedict in 2008 and Pope Francis in 2015.

He created the crosier for Bishop Brennan, a longtime friend, from a piece of sapele, a hardwood from Africa that the carpenter had left over in his shop. He had studied what a staff might have looked like for King David when he was a shepherd for the design.

He told the Catholic Review he sent Bishop Brennan a picture of the crosier design, shortly after he was ordained an auxiliary bishop of Baltimore in 2016, and the bishop approved it before he started work.

The crosier took more than a year to create. “For me, it was an honor to be able to help him out in any way I could,” Deacon Cahoon said. “It is a burden as well as an honor to become a bishop. As a deacon, this is something I could offer him – as well as my prayers.”

The deacon said he volunteered to make the crosier for Bishop Brennan; in turn, the bishop made “a generous donation” to the St. Mary’s in Barnesville’s project in Haiti, where it has a sister parish, he said.

Deacon Cahoon has his own shop, St. Joseph’s Carpentry Shop in Poolsville, Md., which focuses on church furnishings and restoration. The altar that was created for Pope Francis’ outdoor Mass at the Shrine of the Immaculate Conception in Washington was designed to be used inside the basilica. It now serves as the main altar there.

Ordained in 1991, Deacon Cahoon has not done any commercial carpentry work since 1989. “Sometime before my own ordination, I decided that I was best doing church woodwork and renovation. It stems out of my vocation.”

A friend of his told him a long time ago that he had the most noble profession, because Jesus himself was a carpenter.

“That led to my first vocation as a carpenter and then as a deacon,” Deacon Cahoon said. “The opportunity to create a crosier for a friend who is a bishop or an altar for a church is always an honor.”