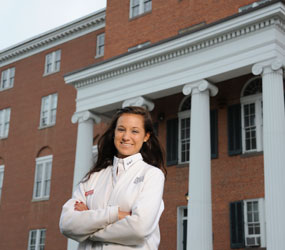 CATONSVILLE – Conner Croxson has been a student page in the Maryland General Assembly, a mentor for a group that uses running to build self-esteem in young girls, the de facto head of the cheer team at Mount de Sales Academy and the founder of an outreach there.

“I’m curious about what’s going on in the world,” Croxson said, in something of an understatement.

Croxson is among two dozen entering Elon (N.C.) University’s Fellows Program, which develops leaders. She’ll major in political science and minor in Spanish and leadership, backed by a Mount de Sales resume that earned her its Caroline Grace Herrmann ’12 Award.

That $1,000 scholarship is bestowed upon a graduating senior who exemplifies the spirit and courage of the late Herrmann, who succumbed to a brain tumor in December 2008, when she was a Mount de Sales freshman.

Croxson, then a sophomore, barely knew Herrmann, but turned her passing into a rallying point, forming the Community Outreach and Service Team (COAST) at Mount de Sales.

During her junior year, she directed the collection of items for more than 100 gift bags for the pediatric oncology unit at Johns Hopkins Hospital.

“Coloring books, Sudoku, playing cards, Slinkys, Chap stick, lotions, little things that we take for granted, but might be special to a child in the hospital all day,” Croxson said. “There were 25 of us who put the bags together in an assembly line. With my Type A personality, I enjoyed it.”

Carol Herrmann, Caroline’s mother, accompanied Croxson and company to Hopkins in March 2010, when the gift bags were delivered.

“Conner organized a team of friends and planned fundraisers,” Herrmann said. “They sold orange bracelets that said, ‘Sweet Caroline … Amazing Grace.’ I see them on girls in stores, at Mass. I’m always touched when I see them.”

Sister Anne Catherine Burleigh, a Dominican Sister of St. Cecilia and principal of Mount de Sales, said that “COAST was Conner’s brainstorm. She instigated that.”

That take-charge attitude was evident again during Croxson’s senior year, when cheer team coach Kathy Wineholt’s availability was limited as her husband dealt with an illness. Croxson scheduled and ran practices, coordinated transportation and organized weekly dinner deliveries to the Wineholt home.

What was the fare her week?

In addition to the cheer team, Croxson ran track and field for the Sailors, which dovetailed nicely with her involvement as a “buddy” runner with Girls on the Run, a Howard County effort that culminates in a 5-K.

Judi Lanciotti, the vice principal of student affairs at Mount de Sales, said “Conner’s passion and enthusiasm are contagious. She leaves her mark on all who encounter her.”

That included the recent session of the Maryland General Assembly, where Croxson served as a student page for two weeks. While pages are required to be bipartisan in their duties, she reveled in debate among her peers.

In Annapolis, she made the acquaintance of Del. James Malone, whose sister, Peggy, was in the Class of 1978 at Mount de Sales. Wineholt, the cheer team coach, has daughters who graduated from the school in 2006 and ’08. One of Croxson’s classroom mentors, AP Government teacher Elizabeth Johnson, is a member of its Class of 1975.

All of those links helped Croxson, an Episcopalian, prosper at a school with one of the strongest Catholic identities in the Archdiocese of Baltimore.

“I came to enjoy the Catholic faith,” Croxson said. “I enjoyed my time at Trinity (a Catholic school in Ellicott City), and wanted to continue in the same setting. I feel a close bond to the spirit at Mount de Sales.”