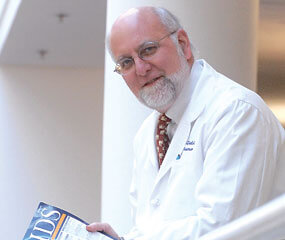 PORT-AU-PRINCE, Haiti –On a sweltering October day, a team of leaders from Catholic Relief Services stopped at St. Francois de Sales Hospital here to receive an update on plans to rebuild and transform it into a teaching hospital.

Most of CRS’s partners in the $10 million venture are Catholic, but the teaching component involves a public institution, the University of Maryland School of Medicine.

The U of M has an existing presence in Haiti, lending the technical expertise and training to CRS in its AIDSRelief program. That relationship proved fortuitous in January 2010, when a magnitude 7 earthquake leveled much of the hospital and this capital city.

In rapid order, CRS assisted the public university in mobilizing more than 250 of its medical pros – many from its renowned Shock Trauma unit – to St. Francois de Sales, where over the next several months U of M teams performed nearly 1,000 surgeries and treated nearly 30,000.

While the U of M and CRS continue to train medical students and professionals in other Haitian cities, the earthquake strained its ability to do so in Port-au-Prince. Thus it was that a group of Haitians recently spent four months studying in Baltimore.

It was just one more dividend of a connection made by Cardinal William H. Keeler, then the Archbishop of Baltimore.

Hackett is nearing the end of a 17-year run (CR, Nov. 10) as president of Baltimore-based CRS, the international humanitarian agency of the U.S. Conference of Catholic Bishops.

Less than a half-mile to the south is the office of Redfield, the associate director of the Institute of Human Virology at the University of Maryland School of Medicine, located, according to its 2011 report, in “the center of Baltimore and our nation’s HIV/AIDS pandemic.”

Both are parishioners of Cathedral of Mary Our Queen in Homeland now, but when Cardinal Keeler suggested they collaborate, Hackett lived in Howard County and worshipped at St. Louis in Clarksville.

The two finally met in November 2002, after Redfield was among the panelists at an HIV/AIDS forum at The Catholic University of America in Washington, D.C.

Within a year, President George W. Bush announced an initial commitment of $15 billion to PEPFAR, the President’s Emergency Plan for AIDS Relief. According to CRS, it headed the only consortium among the four initial PEPFAR grant recipients, with its partners including the U of M.

“The key to this effort,” said Michele F. Broemmelsiek, chief of AIDSRelief for CRS, “is the relationship between Ken Hackett and Bob Redfield. For a number of years, Bob had been trying to get the Catholic church to respond to HIV/AIDS.”

Redfield, 60, came to Baltimore in 1996 after retiring from the U.S. Army as a colonel. At Walter Reed Army Medical Center in Washington, D.C., his research showed that HIV could be transmitted through heterosexual contact. He also worked in some of Africa’s most AIDS-stricken nations.

“There is no greater social injustice than inequity in the ability to live,” said Redfield, who did his undergraduate and graduate work at Georgetown University. “That was never more viscerally understood than when I went to Botswana and saw life expectancy had dropped under 30 when ours was pushing 80.”

He did, however, see hope.

“The Catholic church,” he said, “was wrestling with its role in the AIDS epidemic, (but) I’ve always had the strong view that it has a responsibility to bring about health equity. Health inequity wasn’t part of God’s plan, it is the result of man’s choices.”

Redfield was interviewed in his Baltimore office, where he displays a photo with nine Malawi women.

“At the time, everyone in the church was interested in helping orphan children,” he said. “The alternative was keeping mothers and dads alive. By treating these women, I prevented 56 children being orphaned.”

By August 2011, through AIDSRelief, CRS had supplied anti-retroviral therapy to more than 267,000 patients and treated more than 686,000 in Africa, Latin America and Haiti.

That is done at 279 local partner treatment facilities (LPTFs). Sixty-five had transitioned from CRS to local management before the Rwanda Ministry of Health, like South Africa before it, took the lead on its AIDSRelief Nov. 18.

Local supervision was paramount before foreign aid came under the federal budget microscope.

“As countries strengthen, we handle care over to local partners,” Broemmelsiek said. “Bob Redfield was crucial to this. As a director at an excellent medical school, he had the capability to bring together specialists in infectious disease and AIDS care.”

In Haiti, there was an LPTF – and a program in which the U of M Medical School trained medical students – at St. Francois de Sales Hospital before it was struck by the earthquake.
The partners in its reconstruction include the Catholic Health Association, several dioceses in Haiti and the University of Notre Dame of Haiti.

“God allowed it (the earthquake) to happen, I believe, because at the end of the day, greater good is going to come of it,” Redfield said. “I say that with a lot of caution, because so many lives were lost, but if you can build an effective health system in Haiti, you can build it anywhere.”

This is the third in a series of reports by Catholic Review Managing Editor Paul McMullen on his travels with a CRS delegation in Haiti. His accommodations in Port-au-Prince were provided by Catholic Relief Services.