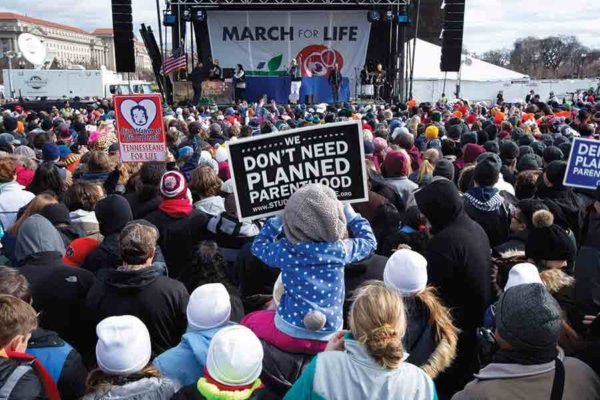 In January, people from across the United States gather in Washington, D.C., for the annual March for Life. This event draws thousands of people from all walks of life. They converge on the Capitol to express their conviction that human life is sacred from the moment of conception until natural death. They bear witness to the truth that human life is God’s precious gift and that each person is endowed by the Creator with inviolable dignity and indeed “a right to life.”

Often numbering more than 500,000 people, the March is not only peaceful but also full of hope and joy. And while it draws people of all ages, the crowd tends to be young, including many millennials. You see a lot of recently married couples and a lot of baby strollers.

I always leave the march with a renewed determination to resist what Pope Francis calls “the throwaway culture” and instead to try to foster genuine love and respect for human life at all stages, but most especially when it is defenseless.

The Lord is at work in the minds and hearts of the good people who attend the march and many more like them – and hopefully in my heart and mind as well. And what is the Lord doing there? The word for it has to be “conversion” – the Lord who is the author, redeemer and lover of human life is converting minds and hearts to the Gospel of Life. And I would further offer that this process of conversion takes place within us on three levels – intellectual, moral and religious.

Intellectual conversion begins when we start asking questions and challenging assumptions. We begin to wonder whether what we had assumed to be true is in fact true. We question the rhetoric and hype that we hear and see. More than a few people who considered themselves avidly “pro-choice” arrived at a point in their lives when they started asking questions about arguments for abortion and changed their minds.

A change of mind, however, often leads to a change in one’s actions, to moral conversion – to a different way of understanding, judging and acting. As a rule, people see themselves as reasonable and conscientious. When individuals take that view of themselves seriously, they may arrive at a point when they become uncomfortable making decisions and acting solely on the basis of what they think is in their best interests. They move beyond and start thinking not only about their own problems, comfort or convenience, but indeed start asking about what really matters, what is really important in life.

Even as individuals undergo intellectual and moral conversion, something deeper may be going on in the depth of their being, namely, a genuinely religious conversion. After all, life is a precious gift from God and once life is seen and understood to be God’s gift, people are sometimes struck by the thought, born of the Holy Spirit, that God loves what he has made.

From there it is a short step to thank God for the gift of life and, in so doing, to fall in love with God. To thank God for creating each person in his image; to thank God for sending his Son to assume and redeem our humanity; to thank God for calling oneself and every person who was ever conceived to friendship with himself – all this prompts us to believe, to trust, to worship the living God. Thus, intellectual convictions and moral choices in favor of life become surrounded by God’s grace and love.

This experience transforms us deeply and fills our pro-life advocacy with genuine love of God and neighbor. Thus we become not only advocates for life but also witnesses to the God of love who created and redeemed us.