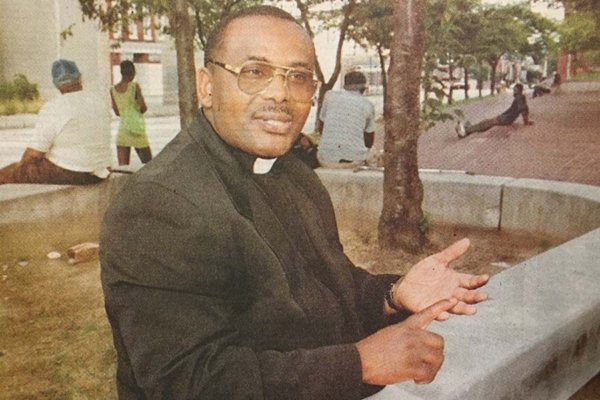 Father Cletus Udoh, M.S.P., a missionary priest from Nigeria, was shocked at the tough urban problems played out right across the street from St. Peter Claver in West Baltimore. (Denise Walker/CR Staff)

As the priest sits in his solitary rectory office at St. Peter Claver in West Baltimore, a driving spring rain beats against the iron-barred windows. The storm pelts scattered debris on the streets and sidewalks of the troubled neighborhood – flushing foam cups and bits of broken concrete into the gutter along Fremont Avenue.

Not so easily washed aside, however, are the young drug dealers who linger across the street in baggy jeans and jackets. Undaunted by the downpour or the sirens that wail in the near distance, they patrol several blocks of boarded-up row houses in pursuit of customers.

Not even a rainy day, it seems, is bad for business in the ‘hood.

The scene is far from what Father Cletus Udoh  expected when the 33-year-old Missionary of St. Paul left his native Nigeria for service in American parishes two years ago.

“At home, you hear utopian stories about a land flowing with milk and honey,” the associate pastor explained, his English richly accented with the refined dialect of his African homeland. “You come here to Pennsylvania and Fremont Avenues and you say, ‘What are they talking about?’ … It’s shocking.”

Father Desmond Ohankwere, 41, another Nigerian Missionary of St. Paul serving in Baltimore, has had similar experiences in his new home.

“It’s been really disturbing to me to see here in America such high violence,” said the associate pastor at St. Francis Xavier on East Oliver Street as he talks about the gun shots he too often hears in the neighborhood. “I can’t imagine it. I sometimes feel like I’m in a prison, locked up here in the rectory.”

For both men, who came to the archdiocese in November at the invitation of the Baltimore-based Josephite religious society, the cultural adjustment to parish life in inner-city U.S.A. has been a struggle.

Perhaps their greatest challenge has been connecting with city youth – a goal they both identified as one of their most important missions during their stay in America.

Father Udoh recalled how during a recent youth group discussion of sexuality, everyone in attendance said there was nothing wrong with extramarital sex. One teenage girl even stood up and told the priest he was wasting her time with talk of abstinence and self-sacrifice.

Confounded by such an attitude, Father Udoh could only surmise that children in America are “confused” because they are told they are “free to do whatever they want to do.” To counter that way of looking at the world, he said priests must provide the right example and preach sacrifice and discipline to teens to keep them from being held back from doing God’s will for them.

Father Ohankwere tries to reach young people through well-articulated homilies that focus on the importance of education, discipline and self control.

“I go forcefully, powerfully, convincingly on what I believe so that they will know what is right,” he explained. “When I talk about the celibate way of life, they know that there are no two ways about it. You may be resented initially, but when they get to know the stuff you are made of, they will respect you.”

The priest said he attends all youth meetings and encourages young people to have their own liturgies. Very consciously, he tries to model the Christian life.

His message seems to have broken through to a good number of the teens in the parish.

Christina Wright, a 15-year-old parishioner of St. Francis Xavier and a member of the youth group, said she and her peers have a developed great admiration for Father Ohankwere.

“When he first came, it was funny the way he talked,” Christina remembered, “but it didn’t take long for people to like him. He is real nice and has very strong beliefs. He’s been very helpful in youth ministry.”

She noted that many parishioners, young and old, are impressed with the African traditions the priest has brought to their church, including a ceremonial “sweep dance” that the young parishioners occasionally perform before Mass, during which they symbolically sweep away any evil in the church with brooms to the beat of lively Gospel music.

Father Ohankwere’s presence at the parish has inspired some young men to consider religious vocations. Four men in their early 20s have already approached him asking for counsel on how to become priests, the missionary said.

“It gives me encouragement,” Father Ohankwere noted with an easy smile. “They are observing me. They want to see how the life is lived. It is a good sign.”

Adjusting to the liturgy in America has been almost as difficult for the missionaries as reaching the youth. Coming from parishes in Nigeria where Masses are packed with singing, hand-clapping people who often spend whole days in worship and celebration, their experience of liturgy in America has been something of a disappointment by comparison. It’s a reality they hope their unique African experience can help change.

“We need to make it a more lively church,” exclaimed Father Ohankwere. “People want a church that is caring. They are not interested in going to an empty building. Let them use their God-given charismatic gifts of singing and praying and they will come to church.”

Father Udoh added that he personally gains joy in “sharing our unique experience of the faith with other people.”

Serving where they are called

The Missionaries of St. Paul order was formed in 1977 in Nigeria by Cardinal Dominic Ekadem with the explicit purpose of providing priests to those parts of the world where they are most needed. Since its founding, missionaries have been stationed in seven African nations and the United States.

The Josephites, founded in the wake of the Emancipation Proclamation to serve the African-American community, began a partnership with the Nigerian priestly order a dozen years ago to provide financial assistance to their missionary counterparts and to bring priests of African heritage to African-American parishes in the U.S.

Father Robert M. Kearns, Josephite superior general, said the two Nigerians serving in Baltimore are steadily adjusting to life in America and are becoming more accepted by their parishioners.

“They have an enthusiasm and joy that is contagious,” he said. “They bring a good sensitivity and good theological training. They’re good listeners and effective preachers who aren’t afraid of speaking the truth. People are very appreciative of them.”

Noting that in Nigeria priests enjoy positions of preeminence in society, he said it can be hard on missionaries in America, where priests often don’t receive the same level of respect.

The Baltimore priests will remain at their present assignments until September, when they will receive permanent assignments that might leave them at their current parishes or move them to others in the archdiocese or around the country.

Even with their challenges, both missionaries agreed that despite an initial resistance, they feel welcome and are enjoying their time in Baltimore.

“The people here are good,” noted Father Ohankwere. “Their love has given me a psychological boost. It would have been difficult for me to spend another day here, having lost my culture and background, without the people’s love.”

Baltimore, with all its blemishes, is the place the missionaries are called, said Father Udoh, and it’s the place they will serve.

“I’ve left Africa,” explained Father Ohankwere. “This is where I belong now. If I die, this is where I am going to be buried. I belong here. That is the zeal that moves me.”