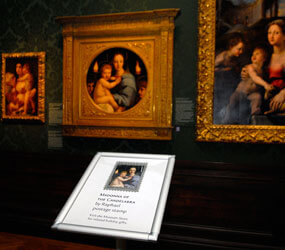 Raphael’s “Madonna of the Candelabra

A Raphael masterpiece that hangs in the Walters Art Museum in Baltimore is getting national attention this holiday season as the U.S. Postal Service features the “Madonna of the Candelabra” as one of its 2011 Christmas stamps.

The circular oil painting, created by the famed Renaissance artist circa 1513, shows a serene Blessed Virgin Mary holding the child Jesus. It was purchased by Henry Walters from a Vatican official in 1900, becoming the first Raphael Madonna to enter the United States.

Joaneath Spicer, curator of Renaissance and Baroque art at the Walters, said the painting is especially notable for the way it combines an idealized image of Mary with a very human Jesus. Standing in front of the masterwork, Spicer pointed out that the child Jesus places a hand on his mother’s chest and exhibits a bit of mischief on his face.

“You have the Christ child saying, ‘You know, it’s almost lunch time,’ “ Spicer said with a laugh. “You have that little bit of humor in there to emphasize Christ’s humanity. This is a real kid. He’s a baby and he needed to eat to grow just as a human baby does.”

Mary’s gesture also touches on humanity, Spicer said, as she lovingly rests her hand on her child’s torso.

“It’s wonderful the sense of touch that’s brought out,” she said. “The little Christ child is being comforted.”

Contemporaries of Raphael such as Leonardo and Michelangelo tended to be more cerebral in their paintings, Spicer said. Artists down through the ages keep coming back to Raphael precisely because of how the Italian artist portrayed humanity, Spicer said.

“He was able to express things in a vocabulary that artists keep using,” she explained.

The painting is perfect for a stamp, Spicer said, because it is very compact, orderly and symmetrical, while also highlighting the sense of naturalism in the human reactions of the subjects.

The postal service used a detail from the painting, honing in on the image of Mary and Jesus and excluding two angels that Spicer believes may have been repainted by other artists.

“The distillation works beautifully as a composition (for a stamp),” she said.

The selection of the Raphael painting for a holiday stamp was a surprise. The postal service had long ago contacted the Walters “out of the blue” about possibly using one of its images, Spicer said, but so much time had passed that she forgot about it.

Stephen Kearney, executive director of stamp services for the U.S. Postal Service noted that this year’s holiday stamps will be the first of their kind to be issued as “Forever stamps” – stamps that can continue to be used to mail 1-ounce first-class mail even after the price of stamps rises.

Last year, more than 1.3 billion holiday stamps were sold between October and December – one in every 10 stamps sold for the year, according to Kearney.

The Madonna of the Candelabra stamp was unveiled Nov. 18 at the Sisters of Charity Motherhouse in Nazareth, Ky.

Because the Raphael painting will be loaned to exhibitions in Spain and France next fall, Spicer said, now is a good time for visitors to check it out at the Walters.

“It was painted at the moment of the High Renaissance,” she said, “when the sense of realism and idealism worked together to really capture the imagination of viewers until today. This picture is a wonderful manifestation of that.”