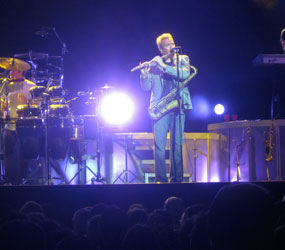 Putting Ray Herrmann on stage is like uncorking a bottle of champagne.

During an Aug. 14 Baltimore performance by the rock group, Chicago, the kinetic musician bubbled over with enthusiasm – clapping his hands above his head, bounding across the Pier Six stage and offering saxophone and flute solos that inspired cheers and ovations.

Herrmann is well accustomed to performing some of the most recognizable music of his time. With Chicago, he regularly plays classics like “Saturday in the Park,” and “25 or 6 to 4.” He had the famous tenor saxophone solo in Brian Setzer’s Grammy-winning “Jump, Jive ‘n Wail.” Herrmann has also performed with Santana, Bob Dylan, Whitney Houston and others.

As much as he loves performing well-known rock music, Herrmann’s favorite project involves compositions that have been unheard and virtually unknown for centuries: the works of St. Alphonsus Maria Liguori.

Many Catholics know St. Alphonsus as a great moral theologian and doctor of the church who founded the Redemptorist order of priests and brothers. Lesser known is that the former lawyer was also an accomplished artist – a painter, architect, poet, sculptor, harpsichordist and composer.

Herrmann’s wife, Theresa, worked with the Redemptorists to translate the lyrics from Italian to English. On the latest CD, Liam Neeson reads prayers composed by St. Alphonsus, with the saint’s music serving as an underscore. The works were performed by Herrmann and musicians from the Los Angeles Philharmonic and singers from the Los Angeles Masters Chorale.

“We were honored that the Redemptorists would give us this opportunity to bring out St. Alphonsus’s music and have people hear it for the first time,” Herrmann said.

The 18th-century Italian saint’s music is classical in style and has been compared to Vivaldi’s. Yet, Herrmann believes St. Alphonsus’s works go much deeper.

“Listening to St. Alphonsus’ music and digging deeper into his lyrics reached my heart immediately,” said Herrmann, a devoted Catholic who tries to attend daily Mass. “Don’t get me wrong, Vivaldi’s ‘Four Seasons’ is wonderful, but St. Alphonsus goes deeper and touches your soul. Of all the things I’ve ever done, the three projects featuring St. Alphonsus’s writings and music have been the most satisfying and the most gratifying.”

Working on the project brought Herrmann closer to God, he said. He hopes the CDs will inspire others to delve deeper into their spirituality.

“St. Alphonsus wanted to bring home to the common Italian the message of the Gospel,” Herrmann said. “We want people who hear these CDs to take action, using them as a prayer aid to gain more insights into the Gospel.”

The CDs were produced by Little Lamb Music, a company founded by Ray and Theresa Herrmann. The first CD they produced was “Little Lamb Lullabies,” a recording of lullabies set to Catholic hymns and Marian songs.

Herrmann, who lives in Ann Arbor and who spends much of his life on tour, said his fellow rock musicians respect him for taking his faith seriously. No matter where he is in the world, he never misses Mass on Sunday.

“Without the Eucharist, I’m totally lost,” he said. “It’s a wonderful tool to keep you on the right path and keep everything in check.”

“I think it’s very easy to be a good human being with the Catholic Church if you follow the magisterium and take the sacraments,” he said. “I try to share that with others. I know it works for me and it works for my wife. If I can share that, I’m happy.”

Visit littlelambmusic.com to purchase Herrmann’s music. Proceeds from the sale of the St. Alphonsus CDs will be used to support Redemptorist missionary work in South America and Africa. Visit George Matysek’s blog at http://tinyurl.com/rherm11 for more on Herrmann, clips of his music, video of him in concert and more.