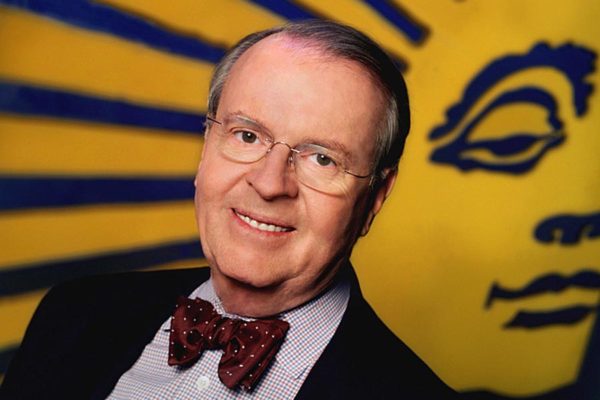 I’ve always found it ironic that big-name news broadcasters are not always eager to speak with the press. More than once, I’ve tried to interview well-known anchors at the local and national level only to hit roadblocks along the way. They were either too busy or too disinterested to respond.

That wasn’t the case with Charles Osgood.

When the popular host of “Sunday Morning” on CBS published a charming memoir in 2004 recounting his boyhood in West Baltimore, I was eager to chat with him. With the help of a Google search, I found the telephone number of CBS headquarters in New York and dialed it before getting transferred to Osgood’s department.

I was a bit startled when I heard the voice at the other end of the line.

Never really expecting to get in touch with the author so quickly or so easily, I was a bit tongue-tied when I asked for an interview. Osgood was completely gracious, giving me 15 minutes right there on the spot.

Now that the veteran broadcaster has announced his well-earned retirement, I thought I’d share the story that resulted from that long-ago conversation. It was published in the July 22, 2004, issue of the Catholic Review.

Thanks for being a class-act, Mr. Osgood!

Young Charles Osgood was in a terrible quandary. After a whole week practicing a Bach organ fugue for Sunday Mass at Our Lady of Lourdes in Liberty Heights, the 9-year-old makeshift virtuoso couldn’t get the music in his fingers.

Knowing he was sure to disappoint Sister Serena, a Sister of Charity at his parish school in West Baltimore who had asked him to play the piece, Charlie had to come up with a way out.

He slipped into the empty church on Friday afternoon and unplugged the organ so it appeared broken.

“In shutting down the organ, I also was shutting down my guaranteed humiliation,” said Mr. Osgood, a veteran CBS broadcaster and host of “Sunday Morning,” in his new book, “Defending Baltimore Against Enemy Attack.”

“I was certain my sabotage wouldn’t be detected: Because the plug was so far from the organ, people would be mystified by its malfunction,” he wrote. “A perfect crime, the way a critic might have described my playing of that piece.”

Unfortunately for Charlie, the Sisters were shrewder than he thought. After discovering that the organ had been unplugged, Sister Serena asked the young man who might have done it. His response, “I think it was me,” was quickly corrected by the nun – “I think it was I.”

“Only Sister Serena could have judged your morals and grammar at the same time,” Mr. Osgood recalled.

Young Charlie wound up spending an hour after school for a week for his crime. Instead of the Bach piece, Sister Serena allowed him to play a classic Catholic hymn, “Like a Strong and Raging Fire.”

Mr. Osgood’s organ recollections are among many nostalgic nods to his Catholic Baltimore upbringing recounted in his new book.

The memoir focuses on one year of his life, 1942, when he was known as Charles Osgood Wood III and when Baltimore children proudly kept up their Victory Gardens, read everything they could about the Allies overseas and collected scrap metal for the war effort.

Opening the book at random, a reader is likely to stumble across some fond reference to the Sisters of Charity, Our Lady of Lourdes or dreams of doing play-by-play announcing for a Catholic Mass or the International League Baltimore Orioles.

In a telephone interview with The Catholic Review, Mr. Osgood said his childhood world revolved around his parish and school. (Our Lady of Lourdes merged with All Saints in 1995 to form New All Saints parish.)

Moving to Baltimore from the Bronx was like moving to paradise, he said.

“I mean it when I say it that Baltimore really is Charm City,” said Mr. Osgood, who lived in Baltimore all through his elementary school years. “I think there is a distinctive charm to Baltimore and it has everything to do with the people who live there.”

Mr. Osgood, a good student, was dubbed “The Professor” by one nun.

The nuns’ high expectations had everything to do with his success as a popular radio broadcaster, writer and television host, Mr. Osgood said.

“I do think these were extremely dedicated teachers,” he explained. “You can’t expect them to do that unless they are motivated by something other than a paycheck. They had a level of dedication you can’t expect in the civilian world.”

Mr. Osgood fondly recalled going door to door selling subscriptions to The Catholic Review. All the money he made was turned over to his father along with the funds he brought in from other odd jobs. Charlie’s dad would then give him an allowance.

One time, Charlie redirected his Catholic Review money from his father and used it to buy a penknife. When it came, as Mr. Osgood tells it in his book, the first thing he cut was himself.

Mr. Osgood told The Catholic Review that the America of 1942 was a far different place from today. There was a stronger sense of unity as the country struggled and sacrificed to defeat the Axis powers, he said.

“The whole country has changed in that regard,” he said. “Part of it is that the war pulled everyone together. Now the war tends to pull everyone apart. Everyone knew then that it was a war we absolutely must win. Everyone totally believed that.”

Mr. Osgood recalled how the Our Lady of Lourdes principal interrupted a school play to announce that the Japanese had bombed Pearl Harbor and how another Sister taught children about St. Barbara, the patron saint of artillery. It seemed that the church was totally on board with the war effort, he said.

The broadcaster never heard a complaint about shortages or blackouts. People simply pulled together in support of their country.

“I remember it as a good time in our life,” he said.

As for his organ skills, Mr. Osgood can still crank out “Tantum Ergo” and “O Salutaris” by heart.

“Defending Baltimore from Enemy Attack” is published by Hyperion Press.