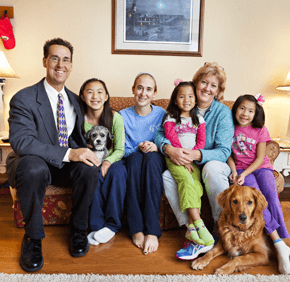 Ed Bartlinski (left) and Ann Bartlinski (second from right) smile at their Catonsville home with several of their children: Mary

As doctors at the Children’s Hospital of Philadelphia wheeled 6-year-old Teresa Bartlinski down a hallway on her way to receive a new heart, Ann Bartlinski, Teresa’s mother, told her how much she loved her.

“Love you more!” the girl instinctively shouted in response, repeating a phrase she often used throughout her life.

They were Teresa’s last words.

The surgery to replace the girl’s diseased heart was unsuccessful, and the young parishioner of St. Mark in Catonsville died July 1 in the arms of parents who had adopted her from a Chinese orphanage in 2010.

Nearly five months after her death, Teresa’s last words are reverberating around the world in ways her family never could have imagined.

Ann and her husband, Ed, are in the process of opening a heart center in Beijing, China, called “Love You More Heart Home.” The facility will provide life-saving cardiac care to orphans waiting to be adopted and to poor families who want to keep their children, but can’t afford  medical expenses.

“The Chinese government is willing to work with us,” explained Ann Bartlinski, 48. “We have two cardiac surgeons in Beijing willing to do the surgeries.”

The Bartlinskis visited China in September to finalize arrangements for the heart home. They are helping orphanages identify children with cardiac disease so they can be transferred to the center and have the surgery before their hearts and lungs become so damaged that they’re no  longer operable.

Ann Bartlinski pointed out that had Teresa had surgery when she was younger, she probably would have never needed a heart transplant.

The heart home is expected to open next year with 25 beds. There will also be five beds for poor families who want to keep their children, but can’t afford medical expenses.

“We’ll train them on how to take care of their child after surgery and then have follow-up care in the village so their children survive,” Ann Bartlinski said.

To get the heart home started, the Bartlinskis need to raise $80,000 for the first year – enough to cover all the medical expenses for 25 children and five families. After that, the Chunmiao Foundation in China is expected to provide regular financial support.

Making hearts whole is nothing new for the Bartlinskis. The couple has four children by birth ranging in age from 14 to 27. They also adopted five children from China: Mary, 11; Lucy, 10; Emilia, 10; Gemma, 7; and Teresa, who would have been 7 on Christmas.

All of their adopted children have medical needs. Ann Bartlinski shared plans about her heart center while sitting in the children’s center at Sinai Hospital in Baltimore, where Emilia was recovering from a bout with sepsis Nov. 14.

Asked where she gets the energy and motivation, the curly-haired mother cast her eyes downward.

“It’s not me,” she said. “God’s giving us the energy, the strength and the ability because once you’ve seen so much need in the orphanages, you just can’t close your eyes and go back to a normal life of our own desires and our own wills.”

Ed Bartlinski, a 52-year-old chiropractor, called it his family’s “duty” to help the less fortunate around  the world.

“That’s really our driving force,” he said. “This is all for Teresa and for God’s will.”

Ann Bartlinski noted that her family is partnering with another adoptive family, Tonya and Mike Lee of Portland, Ore., to make the heart home a reality. The Bartlinskis joined the board of Little Hearts Medical, the Lees’ foundation, which is helping set up the heart home. The Lees adopted a girl named Ping who was Teresa’s best friend in a Beijing orphanage.

“God put all the people in the right places,” Ann Bartlinski said. “I know Teresa’s right up there in heaven telling Jesus what she wants him to do.”