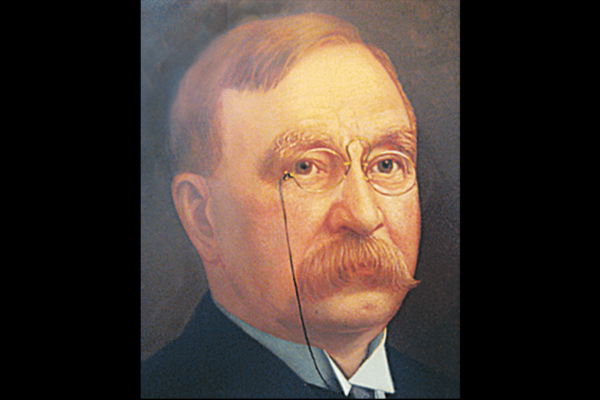 As flames inched their way toward O’Neill’s popular dry goods store, the well-known Irish merchant is said to have rushed to a Carmelite convent. The devoted Catholic begged the nuns to intercede with God so his store might be saved in the Feb. 7 fire. The red-headed businessman pledged that if his business was spared, he would build a great cathedral for Baltimore.

Flames came within inches of O’Neill’s store at Charles and Lexington Streets before the winds shifted and sent the inferno in a different direction. About 1,500 buildings in a 75-block area were destroyed, but O’Neill’s was not among them.

The philanthropist, who employed approximately 500 people in Baltimore, would be true to his word.

After his death in 1919, O’Neill bequeathed $5 million to Cardinal James Gibbons and his successors to be used “as a nucleus for, and for the erecting of, a Cathedral Church in the City of Baltimore.” His fortune was also designated to benefit what is now Loyola University Maryland in Baltimore and to erect a new hospital in Baltimore.

The Cathedral of Mary Our Queen and Good Samaritan Hospital are the products of O’Neill’s act of generous faith.

It took several decades after O’Neill’s death for the two projects to begin. The merchant had stipulated that the money was not to be used until after the death of his wife, Roberta. Although she died in 1936, the Great Depression and World War II delayed progress on the buildings.

Archbishop Francis P. Keough finally broke ground on Oct. 10, 1954, for a limestone cathedral that was to represent “an adaptation of Gothic principles to modern expression.”

The cathedral took its name from a worldwide announcement made by Pope Pius XII one day after the groundbreaking. It was on that day, in the Marian month of October, that the pontiff instituted the feast of Mary Our Queen. The building was dedicated Nov. 15, 1959.

Good Samaritan Hospital, which at O’Neill’s request would not carry his name, opened in 1968.