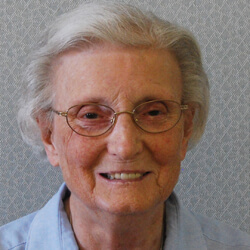 A funeral Mass for Sister Mary Beard, a Daughter of Charity of St. Vincent de Paul, was offered June 10 at the Basilica of the National Shrine of St. Elizabeth Ann Seton in Emmitsburg. Sister Mary died June 7 at age 88, after giving 53 years to her vocation.

In the Archdiocese of Baltimore, her ministry included St. Vincent Infant Home in Baltimore, 1966-71; Immaculate Conception, 1979-80, when she also served as the local community superior; in Emmitsburg as councilor for social ministry for the Daughters’ former Southeast Province, 1983-89; director of residents’ support at Jenkins Memorial Home (Senior Living Community) in Baltimore, 1989-91; and administrator of Seton Center in Emmitsburg, 1991-96, which included one year serving as local community superior of Bethany Community. In 2009, Sister Mary joined the Ministry of Prayer at Villa St. Michael in Emmitsburg, where she served until the time of her death.