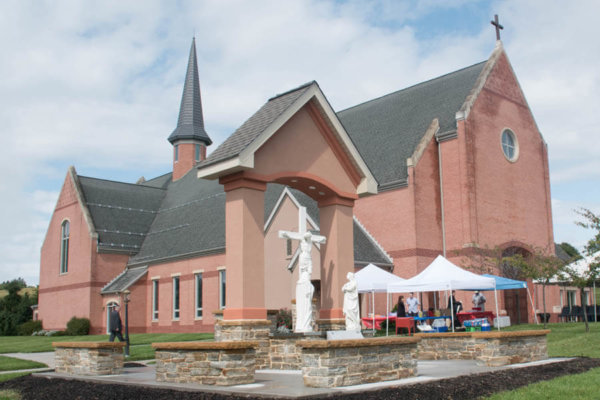 The Grotto for the Preservation of Life at St. Bartholomew in Manchester was dedicated Sept. 3. (Emily Rosenthal/Special to the Review)

The dedication of the Grotto for the Preservation of Life began with noon Mass, which was celebrated by the archbishop along with Father Michael Roach, pastor, and other visiting priests.  The archbishop expressed his hopes for how the grotto will be used.

“May it always be a beloved place of prayer and devotion; a shrine to the sacrificial love of the Savior who died to save us from our sins; a place of peace and rest where the crucified Savior’s heart can speak to our hearts,” Archbishop Lori said.

The grotto is dedicated to the sanctity of life and to lives lost to abortion and euthanasia. An engraving on a stone marker at the grotto asks the Blessed Virgin Mary to “inspire within us a respect for life from the moment of conception until natural death.”

The Knights of Columbus Council 9127 of St. Bartholomew, which sponsored the grotto’s design and construction, followed the recessional at the end of Mass for the blessing and dedication outside.  Father Roach called for the dedication to end the same way as the new church’s dedication 11 years ago — with a round of “God Bless America.”

The idea for a grotto first came from Past Grand Knight David Rupp and his wife as plans for a new church building were being finalized in the 1990s, according to Father Roach. Since the idea’s inception, fundraisers were held to support the project’s monetary goal of $25,000.

The new church at St. Bartholomew, which opened in 2006, is located on 35 acres on the top of a hill off of Route 30, the main corridor that connects northeastern Carroll County to the Baltimore area.

Gerard Zeller, a member of Council 9127, designed the grotto.  He owns his own landscaping company and serves as manager of grounds, landscaping and recycling at Morgan State University.

Zeller, who holds a master’s degree in landscape architecture, served as Grand Knight for Council 9127 from 2015 to 2016.  As his term was nearing its end, the project’s fundraising goal was met.

As the design ideas for a grotto were first turning in Zeller’s head, he assumed the shrine would be built in a tucked-away place on the property of the new church.

When Father Roach gave the project a prominent location in front of the church, it presented Zeller with a unique design challenge.  Not only would the grotto be visible from Route 30, but it also would be visible from all directions.

The final design concept came from the new church itself; each week for Mass, parishioners enter the church from the side door, which sits under an archway.  The grotto’s design mimics this arch, with the Calvary statuary resting underneath.

Though Zeller was overseeing the project, many hands were involved in the construction process, and they were not limited to businesses.

“We have so many talents within our Knights and within our parishioners,” Zeller said.

The project could not have been completed, though, without the help of professionals.

Surrounding the arch and statuary are six benches, with their foundations made of Butler Stone, a nod to a natural resource of the area.  Dryvit, a stucco finish, was used to match the church.  Zeller wanted the grotto to be as timeless as the church itself.

Members of the parish commented on the impact the grotto is already having as they gathered after the dedication for pit beef sandwiches and desserts, provided by Council 9127 and the Ladies Auxiliary.

“So many have come to me and said they feel very comfortable coming to the grotto and being able to come pray,” said Al Martin, member of Council 9127 and usher.  He added that they are thankful that it is there for prayer, even when the church is not open.

“I don’t expect great conversions from this,” said Father Roach, “but I think some hearts may be moved.”