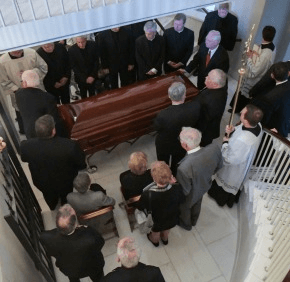 By George P. Matysek Jr.
gmatysek@CatholicReview.org
Twitter: @ReviewMatysek
Moments after Cardinal William H. Keeler’s earthly remains were entombed in the undercroft crypt of the Basilica of the National Shrine of the Assumption of the Blessed Virgin Mary in Baltimore March 28, members of his family stood in front of the place of rest for one last opportunity to say goodbye after days of tributes to the 14th archbishop of Baltimore, who died March 23.
Some kissed their fingers and then touched them to the casket before the vault was to be sealed with a marble stone bearing the cardinal’s name in Latin.
“It’s a little surreal,” said Stephanie Gustafson, one of Cardinal Keeler’s cousins, “but we are glad that he’s laid to rest here, where it meant so much.”

Archbishop William E. Lori says a final blessing before Cardinal Keeler’s body is laid to rest in the crypt of the Basilica of the Shrine of the Assumption of the Blessed Virgin Mary in Baltimore March 28. (Kevin J. Parks/CR Staff)
Cardinal Keeler oversaw a $32 million restoration of the basilica, returning it to the original vision of Benjamin Henry Latrobe, architect of the U.S. capital, and Archbishop John Carroll, the founding archbishop of the Archdiocese of Baltimore and the first spiritual shepherd in the United States.
Cardinal Keeler’s tomb is located next to that of Archbishop Michael Curley, the last Baltimore archbishop to be buried at the basilica – 70 years ago. Other archbishops entombed there are Archbishop Carroll, Archbishop Ambrose Marechal, Archbishop James Whitfield, Archbishop Samuel Eccleston, Archbishop Francis Patrick Kenrick, Archbishop Martin J. Spalding and Cardinal James Gibbons.
Robert Reier, the basilica’s operations manager, noted that there now are three burial spots remaining in the crypt.
“There’s no more appropriate place for the cardinal to be buried than this place he truly, truly loved with all his heart,” said Father Gilbert Seitz, judicial vicar of the Tribunal of the Archdiocese of Baltimore and one of the Cardinal Keeler’s many priest friends. “This is where he felt the Lord’s love most clearly, and I think it’s safe to say this is the place where he radiated that love most clearly. This was his home in every sense of the word.”
During the rite of committal, Archbishop William E. Lori prayed that God remember the mercy with which he graced Cardinal Keeler.
“Receive him, we pray, into the mansions of the saints,” the archbishop prayed. “As we make ready our brother’s resting place, look also with favor on those who mourn and comfort them in their loss.”

As in his life, all welcomed at Cardinal Keeler’s funeral Mass