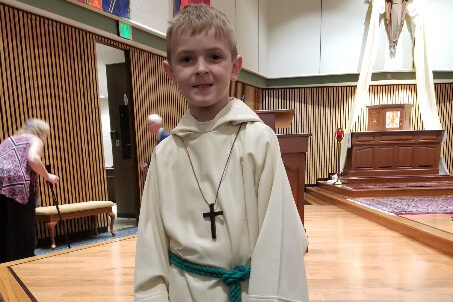 When Deacon Ray Van Pelt announced at the end of Mass at St. Joan of Arc in Aberdeen that the church was looking for altar servers, Collin whispered to me, “I want to do that!”

Collin has been attending Mass weekly (barring the occasional snow storm or stomach bug) since he was 5 days old. Unlike his siblings, he has always been able to remain in the pew for the duration of Mass. As he has received his sacraments of initiation, he has increased his involvement in the Mass. His Catholic education has increased his knowledge of our church and he enjoys teaching his siblings the Bible stories and prayers he has learned in school. We say a decade of the rosary every night before bed and offer up special intentions throughout the day for strangers who are suffering and for the people we love. Collin even designs churches on Minecraft, complete with pulpits and tabernacles. I am always amazed by his remarkable focus and unwavering faith.

Naturally, Collin’s next move as a young Catholic should be to become an altar server, and, in doing so, he will be following a long family tradition. My father was an altar server at St. Michael of Overlea. Both of my grandfathers served, as well. My mom’s dad told me that he’d once dropped the consecrated hosts on the altar during Communion. I was so terrified that I would make a big mistake like that, so I chose not to follow in the footsteps of my ancestors, though many of my cousins did.

Looking back, I wish I would have had the courage to assist Father Callahan, the longstanding pastor at St. Margaret in Bel Air, where I grew up. As I watched Deacon Ray and our lovely sacristan LuAnn walk and talk Collin and his three friends through their upcoming role in the Mass, I felt nervous again. There were so many things to remember! So many mistakes that could be made! I hoped that Collin wouldn’t feel as anxious as I did, and as I watched him smiling and volunteering to try out each part of the role, I knew that he was going to do a great job. After all, he was the two-year-old who sat calmly in the pew, without making a peep, soaking up God’s glory in the kaleidoscope of light that graced his hands, beaming in through the gorgeous windows at St. Patrick’s in Havre de Grace.

And now, at St. Joan of Arc, he will take a turn on the other end of the service, the side that provides, rather than receives. When I saw him in his alb, having completed his intense training without a smidgen of apprehension about his chosen new role, I recognized that he has been called to serve the Lord in this way. I pray that this is another major step into his journey of faith and that the Holy Spirit may guide him along the way.