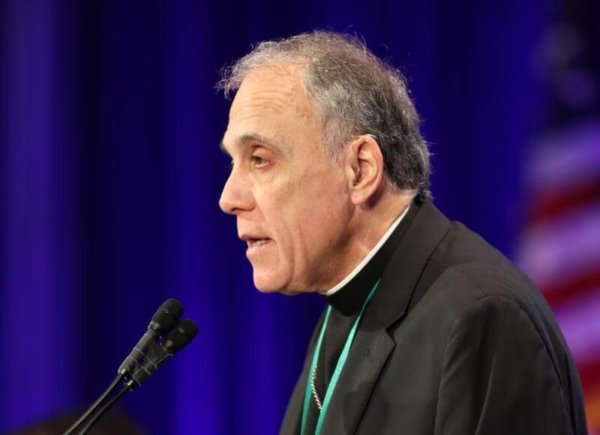 Cardinal Daniel N. DiNardo of Galveston-Houston, president of the U.S. Conference of Catholic Bishops, delivers the presidential address Nov. 12 during the fall general assembly of the USCCB in Baltimore. (CNS photo/Bob Roller)

The U.S. bishops had a chance to take definitive action to bolster accountability for bishops who engage in sexual misconduct or fail to take action about wayward clergy or employees in their dioceses. Unfortunately, those plans were short-circuited just before their Nov. 12-14 meeting began in Baltimore, with an intervention from the Vatican’s Congregation for Bishops requesting the bishops not vote on the proposals.

So, instead of a vote, the U.S. bishops’ discussions provided a consensus for USCCB President Cardinal Daniel N. DiNardo as he heads to a meeting in Rome in February with presidents of bishops’ conferences from around the world.

When news broke this summer of sexual abuse and misconduct allegations against former Washington Archbishop Theodore E. McCarrick, followed by the release of a Pennsylvania grand jury report detailing allegations against more than 300 priests, Cardinal DiNardo and the conference committed to three goals: Do what they could to get to the bottom of the situation involving Archbishop McCarrick, including how he had risen in the episcopacy despite rumors of misconduct; making reporting of abuse by bishops easier; and developing a means to hold bishops accountable that was independent, duly authorized and had substantial lay involvement.

“Now, we are on course to accomplish these goals,” Cardinal DiNardo said in closing remarks Nov. 14. “That is the direction that you and the survivors of abuse across our country have given me for the February meeting in Rome.”

That may not be enough to satisfy many Catholics, who hoped for a solid response by now. It is probably not enough to satisfy even the bishops, who clearly expressed their concerns and frustration during one of the most robust discussions at a bishops’ meeting in recent memory.

Most of all, it will not satisfy the calls for accountability from victim-survivors, some of whose voices were represented in presentations to the bishops, and others who protested outside the conference hotel.

Bishop W. Shawn McKnight of the Diocese of Jefferson City, Mo., noted that attention to the issue of clergy sexual abuse helps people come forward to tell their own stories. At a news conference Nov. 14, he said, “We have to find and uncover the victims who are still out there.”

Archbishop Lori is not waiting for the USCCB or bishops around the world to act on episcopal accountability. He and his auxiliary bishops are already subject to the same code of conduct as any other clergy, employees or volunteers in the archdiocese and any possible accusations against a bishop would be handled by the local Independent Review Board.

Pope Francis and bishops around the world must understand how important this issue is, not just to the United States, or Chile or Ireland. Clergy abuse and cover-ups strike at the heart of Jesus. Even though the U.S. has had measurable success in the reduction of new incidents of abuse since 2002, there is much more to be done.

We all wanted some definitive answers by now. God willing, February and June – the next U.S. bishops meeting – will bring the remedies that victim-survivors of sexual abuse, and the whole church, desperately need.