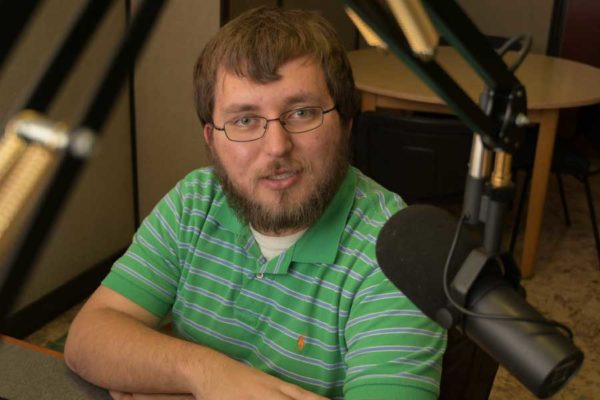 Helping to spread the gospel, St. Benedict Church parishioner and Loyola University Maryland graduate, Cody Barber, is seen May 11 at the mic of 92.7 FM-WVTO in Baltimore. Cody manages the parish radio station, which airs 2 – 10 a.m. throughout the week. (Kevin J. Parks/CR Staff)

St. Benedict Parish in Baltimore is taking the Gospel to the airwaves.

According to station manager Cody Barber, a 23-year-old parishioner of St. Benedict and graduate of Loyola University Maryland in Baltimore, WVTO can be heard up to 6 miles from the church bell tower from which it is broadcast, though topography may affect the signal.

“It all depends on where you’re at and how the terrain is,” Barber said, adding that WVTO can be heard as far as Druid Hill Park, Glen Burnie, Catonsville and East Baltimore.

“I was a little shocked to hear his voice on the radio this morning,” chuckled Benedictine Father Paschal Morlino, his pastor. “He’s pretty knowledgeable. … It’s a wonderful job for him because he’s so creative.”

Father Morlino said he had been trying to secure a radio station for about four years.

“When the FCC opened up some frequencies, we got wind of it and started working on it,” he said.

The frequency is shared with two other entities, though neither has begun broadcasting. Father Morlino said the time slot is “not perfect,” though he is pleased to have morning commuters’ ears, and to have secured the slot in the face of “lots of opposition.”

He added that WVTO will include original programming in the future.

The WVTO studio is on the second floor of the St. Benedict parish center.