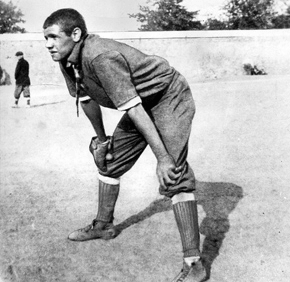 One hundred years ago on St. Valentine’s Day, George Herman “Babe” Ruth Jr. began his meteoric rise in professional baseball when he signed a contract with the minor league Baltimore Orioles.

Long before the future Hall of Famer became the “Sultan of Swat,” however, he was introduced to the game by a man the Babe would later describe as the greatest person he ever knew.

Brother Matthias Boutilier, a hulking, six-feet-six-inch, 250-pound Xaverian brother from Canada who served as the disciplinarian of St. Mary’s Industrial School for Boys in Southwest Baltimore, was Ruth’s father figure.

Sent to the training school by his parents at age 7 as an “incorrigible,” the Baltimore-born Ruth lived there 12 years. Part of the school’s mission was to help straighten out wayward youths.

“He used to back me in a corner of the big yard at St. Mary’s and bunt a ball to me by the hour, correcting the mistakes I made with my hands and feet,” Ruth wrote in an essay for Guideposts magazine published shortly after his death in 1948.

Ruth never forgot the first time he watched his hero hit a ball.

“The baseball in 1902 was a lump of mush,” the Yankee legend wrote, “but Brother Matthias would stand at the end of the yard, throw the ball up with his left hand, and give it a terrific belt with the bat he held in his right hand. The ball would carry 350 feet, a tremendous knock in those days.”

More than a century after the home run king’s introduction to the game, baseball is on track to return to the same spot where he played. As part of a redevelopment plan for the property of the now-closed Cardinal Gibbons School, located on the grounds of the former St. Mary’s Industrial School, nearby St. Agnes Hospital is planning a state-of-the-art community baseball diamond.

Developed in conjunction with the Cal Ripken Sr. Foundation, the field will be oriented so home plate sits at the same spot as in Ruth’s day. Last year, the hospital announced that $1.4 million had already been raised for the field, which the Ripken Foundation projects to be completed this year.

What makes the diamond especially meaningful is that developers say it will be open to at-risk youths probably not all that different from the troubled boy who played there so many decades ago.

In his Guideposts essay, Ruth said he may have forever been an incorrigible if not for Brother Matthias and the religious training he received at St. Mary’s. Although he admitted to sometimes straying from the moral framework the brothers gave him, it remained with him always.

Today, just as baseball and a caring mentor helped save Ruth, maybe the same combination will do so again for a new generation that plays on Babe Ruth Field.

For the Bambino, who often visited his old school and spoke with children, it was wrong to give up on any child.

“I never forgot where I came from,” Ruth wrote. “Every dirty-faced kid I see is another useful citizen.”