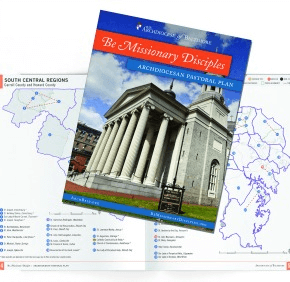 Archbishop William E. Lori greets parishioners following Mass at St. Paul Church in Ellicott City Aug. 13. The archbishop is emphasizing missionary discipleship as the Archdiocese of Baltimore prepares to organize parishes into "pastorates." (Kevin J. Parks/CR Staff)|
MIDDLETOWN – A committee comprised of pastors and key staff members from the Catholic Center will meet in early December to consider feedback on the proposed planning process in which parishes will be reorganized into pastorates.
At the first of four feedback meetings, about 90 parish leaders from 21 parishes in the western and central parts of the archdiocese gathered  Nov. 9 at Holy Family in Middletown to provide feedback from parish pastoral and finance councils and parishioners to the archdiocesan planning office.
The proposed model focuses on the mission of the church to help Catholics become missionary disciples, who are then empowered to evangelize others. Each parish in the archdiocese will be part of a pastorate, with from one to five parishes grouped together with one pastoral leader and  leadership team.
Additional meetings were held Nov. 10 and 11 in Fullerton (for Harford County parishes and all Baltimore County regions), Millersville (Anne Arundel and South Central regions) and Baltimore (all harbor and metro regions). Feedback from the meetings will be considered by a committee, called the Design Team, and presented to Archbishop William E. Lori and his senior staff for revisions to the proposed model in the coming months.
The final plan will be presented in February to the Presbyteral Council, an archdiocese-wide committee of priests who advise the archbishop, before the archbishop formally announces the results.
The structures of pastorates and parish facilities are not the outcome that will make the difference, planning consultant Dennis Cheesebrow told the group gathered in western  Maryland.
“This is about parish life,” he said. “The outcomes of your discussions today will have a direct impact on the model. The cake is not fully baked yet.”
Pastors and up to four parish leaders from each parish were invited to the meetings, where they sat in small groups with others in their proposed pastorate.
Darby Smith, chairman of the finance committee of St. James in Boonsboro, acknowledged after the Nov. 9 meeting that parishes need to start doing more together. Under the proposed pastorate model, St. James would be in a pastorate with St. Joseph in Hagerstown and St. Augustine in Williamsport.
“It shouldn’t all be dependent on the priest,” said Smith, who is also past chairman of St. James’ pastoral council. “The parish belongs to the people and the people have to take a sense of ownership.”
He said he looked forward to the planning office sharing success stories from parishes that have already taken steps to work together or merge.
Cheesebrow and Daphne Daly, director of the Office of Pastoral Planning for the archdiocese, presented statistics on trends in Mass attendance and other key benchmarks. From 2010-15, Daly said, 63 of the 142 parishes in the archdiocese increased their registered families and 37 had an increase in Mass attendance. However, she noted, only 23 of those parishes had an increase in both areas.
Daly highlighted some 10-year trends in the region served by the parishes gathered in Middletown. The registered families in Frederick, Washington, Allegany and Garrett counties rose by 1 percent from 2006 to 2015. In that same period, Mass attendance in the counties fell by 14 percent.
Cheesebrow, who consults on planning for several dioceses across the country, noted, “The demographic patterns indicate the church should be growing.”
Coordinators gave the parish leaders an hour to discuss in small groups the strengths and weaknesses of their parishes and the possibilities to be gained by working together in a pastorate. Their basis for the discussion was parish mission readiness statements prepared in response to a survey taken around the archdiocese in November 2015.
While the proposed pastorate model does not assume that parishes will merge or that churches or campuses will be closed, in the small groups some leaders shared concern in a case where a pastorate was formed with a larger parish and a smaller one, that the latter would be closed and subsumed by the larger parish.
One pastor in a small group tried to allay apprehension: “I don’t want us to make our decisions based on our greatest fears. They should be made on our best hopes.” Instead of looking at what parishes lose by working together in a pastorate, they should look at what each community gains, he added.
After the table discussions, some participants indicated that they found complementary strengths between parishes; in some cases, a ministry that one parish lacked was offered by the other, and vice versa.
Cheesebrow cautioned that while the pastorate model will be revised subject to the feedback from four regional meetings, some ideas will be accepted and some will not, saying, “All the different ideas may not work together.” The design team will review the feedback and present modifications to Archbishop Lori. The archbishop will make the final decision on how all the pastorates fit together, Cheesebrow said.
At Our Lady of the Mountains, which was established in 2011 as the merger of five parishes in the Cumberland area, staff member Theresa Files said it took several years for people really to accept the changes and no longer think of their former individual parishes. In the last year or so, it has turned around and ministries are flourishing.

“When people have spent a lifetime giving to the church in individual parishes, they need a place to authentically speak of their grief about the process,” she said. She noted that these parishes are now “1,000 times better off” since the merger was completed.

As pastorates are developed, Archbishop Lori calls for ‘mission focus’