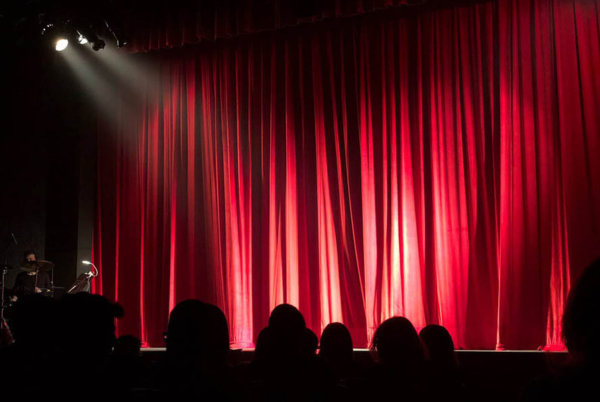 I was driving my sons, Collin (9) and Leo (5) to play practice when Frank (6) announced, “I want to be in Mary Poppins, too!” I wasn’t sure how to respond. All of my children love Mary Poppins, who is a TV nanny to them while I write or cook or simply need a quiet moment to breathe. They sing “Spoonful of Sugar” when they put their toys away and pretend to jump into the chalk pictures they draw on our patio like Mary, Bert, Jane, and Michael do on one of their adventures. I knew Frank could play Mary Poppins in the comfort of our home, but could he do it on stage?

Frank has autism, which is a developmental disorder that has its most profound effects on sensory and social aspects on a person’s life. Frank looks like a typical six-year-old boy, and is very, very bright, but his behavior, particularly in public, resembles that of his two-year-old sister. Screaming, tantrums, and running off are just a few of the things Frank does if he is feeling frustrated. They’re the sort of things that could turn a “Jolly Holiday” into a heinous nightmare!

When we got to play practice, I told Frank we could ask Miss Brittany Rosenkranz, the director, if he could be in the show. In my mind, I begged her to say “no,” but instead she said “yes.” I pulled her aside and explained that he has autism and that he probably wouldn’t be able to handle being in a play. “He will be fine,” she said. “Trust me.”

I used to drop Collin off at play practice and run errands, but I was afraid that if I left the community center Frank would start screaming uncontrollably during a song he didn’t like or pinch another actor for getting in his way or run off down the railroad tracks out back and I would never see him again. I kept imagining Frank having a meltdown on stage, ruining the entire production for everyone involved. I never wanted to be a “stage mother,” but I was Frank’s mom, which meant I would need to hover over him for his own safety and everyone else’s sanity. I kept peeking through the window into the rehearsal room and was surprised to find that for the most part, he was sitting quietly, usually with an older girl by his side. Once, I looked in and saw Miss Brittany crouched down at Frank’s level, smiling at him and holding his hand. I could tell that she genuinely understood him and that it was safe for me to take a few steps out of their way.

One night, Frank sat down next to a boy who looked like an older version of him. He and Frank gazed at the screen of his Nintendo Switch; apart, yet together, like the inconsistent relationship Frank has with the world outside of him. I told Frank to give the boy some space, but the boy’s mother said Frank and Andrew had become “best buddies” backstage. After talking we realized that both boys had autism. She also explained that she was Miss Brittany’s mother and that Brittany and her sister Bethany had a special gift for working with people who have autism, partially because they are caregivers for Andrew. “We all just love Frank,” she said.

At the final dress rehearsal, Frank refused to wear his bumblebee costume and said he wasn’t going to be in the play anymore. I assumed that we had reached the inevitable end of Frank’s acting career and tried to take him home, but Brittany told me that he promised her that he would do it when “the people come.” Sure enough, when the audience filled the auditorium the following night, Frank amazed our entire family as he sang and danced along to a few of his favorite songs. He even wore the bumblebee costume, but without wings because, according to Frank’s literal worldview, “people can’t fly.”

The final number was “Anything Can Happen If You Let It.” It isn’t a part of the movie version of Mary Poppins, but it was the song that spoke most to me after seeing my shy, unpredictable child performing on a big stage in front of strangers.

I had to agree. I didn’t think it would happen, but it did. I said, “Yes,” to his seemingly impossible request and trusted Brittany to provide him with the words, movement, and confidence he needed to make his acting debut. He even made a friend. Instead of blocking his light, I gave him the chance to shine. It happened because I let it.

At the end of the last show, Brittany announced next year’s production: Willy Wonka. I asked Frank if he was excited to be an Oompa Loompa, but he said, “No. I’m gonna be Charlie.”