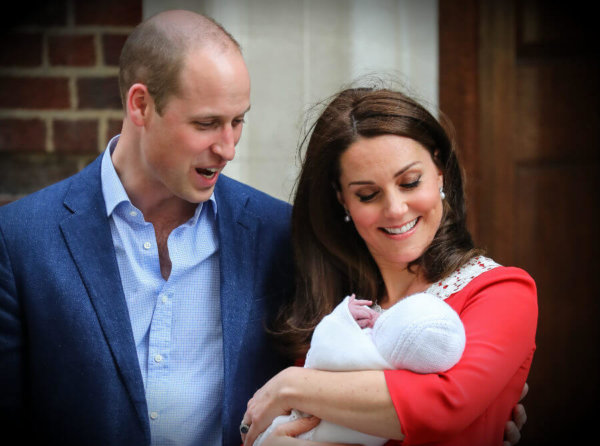 Prince William and Cathrine, Duchess of Cambridge, are seen with their new son in London April 23. The baby is the couple's third child. (CNS photo/John Rainford,WENN.com via Reuters)

Kate, you may think you have this parenting thing down by now, but you are in for a treat. Because now you and Prince William are parents to a third child.

What’s so special about third children? Well…first children? They want to succeed and please their parents.

Second children? They’re a little more relaxed and fun-loving, but they’re probably not rocking the boat.

Third children? We’re independent thinkers. We don’t follow a style. We do our own third child thing. Rules schmules. They’re there, but they don’t necessarily apply to those of us who are third children. We don’t want to follow the path that’s already been set. We want to stand out a little bit. We want to be the first to do something all on our own.

My mother, who has six children, claimed that the big jump was from two to three children. She tells me that when the third child arrives, you realize you just can’t do it all. You don’t have enough hands or parents to navigate life with three children. You relax. You let go a little. So there’s no real difference between three children and six.

When I saw your lovely red dress and your perfectly styled hair and your elegant high heels as you stood on the hospital steps, I was wondering whether you’ve relaxed yet. But you will. And soon enough you’ll find out that this little bundle of joy isn’t like his big siblings.

He won’t be, you see. It’s a third child thing.

You and your husband? You’re both oldest children. I bet you understand how to parent George because he’s also an oldest child. And Charlotte is a first girl, so I’m thinking she might not be your typical second child. A first girl is sort of like a first child. You’re probably doing just fine there too.

But this little guy? Number five in line to the throne? And number three child in your household? He’s going to strike out on his own, forge his own path. And it will be so much fun.

You probably have some sense of this because you have a brother who’s a third child. And I’m willing to bet he’s as excited about this baby boy as I am. He would be, you see. It might be baffling to oldest children who so often meet oldest children. But third children don’t meet as many third children, so when we do, it’s very special.

And this is a special time for you too. There’s a reason that the third character in stories is often the strong or interesting or unusual one. There’s also a reason they say, “The third time’s a charm.”

You have so, so, so much to look forward to. Congratulations to you and to the whole family on baby number three.