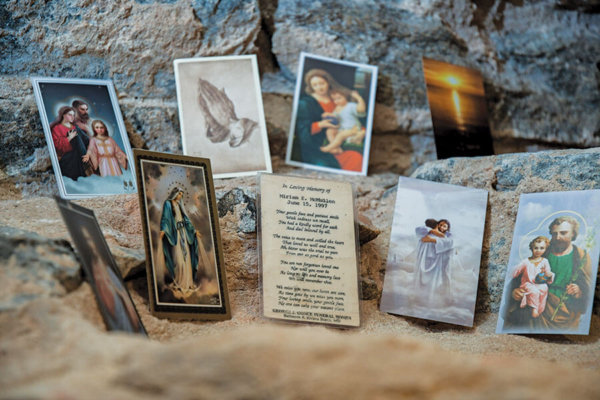 The garage at our home holds two Hyundais and ballast from 33 years of marriage, 45 years of bylines and a lifelong interest in sports.

Binders filled with thousands of issues of Sports Illustrated fill several shelves in a storage unit that is 12-feet wide and 6-feet tall. Overhead are dozens of baseball caps, most bragging about a destination.

It’s been a decade since my subscription to the magazine lapsed; “Alaska” announces the only cap purchased in recent years. One collection, however, does keep expanding.

At a funeral home or funeral Mass, I collect a keepsake of the deceased. Occasionally it’s a printed program, but more likely a 4-inch-by-2½-inch card. On one side is a name, dates of birth and death, and a prayer or sentiment. On the other is a spiritual image or nature scene.

Many are from Ruck Funeral Homes. Many more are from Gonce Funeral Service in Brooklyn, a frequent gathering place for baby boomers raised along the Baltimore City-Anne Arundel County border.

When I began work at the Review, Tim Zerhusen of Catholic Printing Services laminated Mom’s dog-eared funeral card. It sits in the console of my car; both of Tim’s parents are in my collection.

In recent years my wife, Mary, and I have paid respects to peers who are mourning the death of a child, as too many in their 20s and 30s fall prey to despair or drug addiction.

A few others also left too early. Disease slowly took my sister-in-law Mary and a heart attack suddenly snatched basketball friend Bob Flynn, but for the most part my collection is filled with people who lived a long, full life.

The College of Cardinals (William H. Keeler) and NFL Hall of Fame (John Steadman) are represented, but most were unheralded people who displayed remarkable kindness. “Moe” Daurice Kiebler grilled the world’s best $3.50 cheeseburger and sang along with me to the jukebox at Catch 22. Ray Baier, aka “the Bank of Baier,” made interest-free loans to young Sun writers so they could purchase a Christmas present for their wife.

I ponder my collection not just on Nov. 2, All Souls’ Day, but each time it grows – including whenever I grab a blazer off the newsroom coatrack and find a funeral card in the vest pocket.

I got to Johnson-Fosbrink Funeral Home on Loch Raven Boulevard a few minutes before the final viewing Oct. 10 to see Lawrence Vojik, a 1980s neighbor on Chesterfield Avenue. We had the room to ourselves. There was never a quiet moment, meanwhile, with James H. Jackson. The Ruck card that I pocketed at St. Dominic at his October 1992 funeral includes the notation “No Socks,” as his seven sons honored their father’s custom.

My collection began as I was figuring out life’s second act. Now that my wife, Mary, and I are nearing our third, we have not only updated our wills, but discussed the hymns we want at our funerals (sorry, you’ll have to be there to find out).

There is a reason the obituary section is dubbed the Irish sports pages; for me, there is nothing melancholy about remembering absent friends.