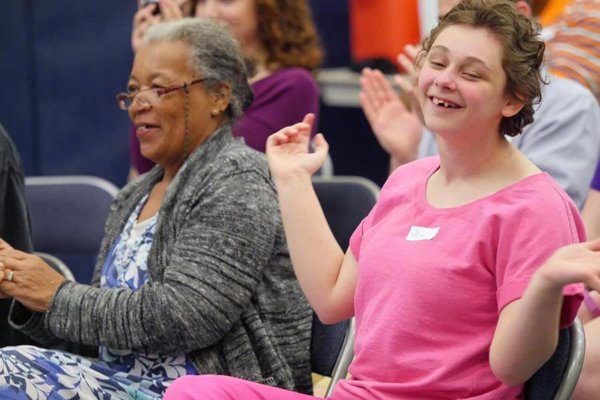 Eva Sanderson and Meagan Rector sing and clap along with performers in the talent show April 17 at a L’Arche event at St. Katharine Drexel in Frederick. (Karen Osborne | CR Staff)|

Rocking back and forth in her seat at St. Katharine Drexel Parish April 17 while the performers waved their arms and mugged for the crowd, the 21-year-old woman with developmental disabilities clapped giddily to the soulful beat.

Minutes later, it was Meagan’s turn to stand in the spotlight.

With some 75 people watching, the ever-smiling parishioner of St. Joseph-on-Carrollton Manor in Buckeystown used sign language to sing along with the “I Love You” song from PBS’s “Barney and Friends.” Her gentle performance received just as much applause – perhaps even a bit more – than the one from the college students.

“This is wonderful because it gives Meagan an outlet,” Jose Rector, Meagan’s father and a St. Joseph parishioner, told the Catholic Review after the performance. “As soon as we tell her we are coming here, it’s something she looks forward to all day long.”

For the last two years, people with developmental disabilities have been gathering once a month at St. Katharine to enjoy meeting people in the wider community and participate in fun activities. The gatherings are organized by Quest for L’Arche, a Frederick-based committee that is working to establish a L’Arche home in Frederick County.

Pam Zusi, a parishioner of St. John the Evangelist in Frederick and a committee member of Quest for L’Arche, said there are currently 140 L’Arche communities around the world. If a home is established in Frederick, it would become the first in Maryland, she said.

Approximately 10 students from Mount’s St. Mary’s “Best Buds” program, which reaches out to those with disabilities, participate in the Quest for L’Arche events every month at St. Katharine. April 17’s gathering included a magic show, singing, dancing and crafts – with the Mount students working directly with those with disabilities. Youths from the parish also assisted.

Asked why he would spend a Friday night in service of those with disabilities, Patrick Flaherty, a 22-year-old senior at the Mount, disagreed with the notion that he is “serving” others or “volunteering.”

“This is just me hanging out with a bunch of awesome people who are really special,” the political science major explained. “They are my friends and it’s like I’m hanging out with friends on a Friday night.”

In participating in the program, Flaherty said he learned that although an individual may have disabilities, he or she is no less a person than he is.

“They may communicate differently,” he said, “but that’s the only difference I see.”

Claire McGrath, a 21-year-old Mount senior biology major and leader of the Best Buds program, called it a “beautiful gift” to be present to people with disabilities – some of whom cannot speak.

“Whenever I come to these events, I’m reminded of the importance of just being present to people,” said McGrath, a parishioner of St. Francis of Assisi in Fulton. “There are so many different ways to communicate with people. Sometimes it might be simply sitting next to someone and being there with your whole heart and your whole mind.”

McGrath said she was inspired by the theology of Jean Vanier, a Catholic theologian and founder of L’Arche.

“He talks a lot about how we are called to reveal one another’s beauty and how every person is sacred and valuable,” said McGrath, who will be moving to Florida to become an assistant at a L’Arche residence in Jacksonville after graduation. “Our call is to reveal that beauty to one another and to show that we are all made in God’s image. I believe that’s what God is calling me to do – to see the beauty in other people and bring it out.”

How to support L’Arche in Frederick:

Quest for L’Arche is currently in a $15,000 fundraising drive to raise money to establish a L’Arche home, which would accommodate up to three people with disabilities and others without disabilities in Frederick. For more information, email questforlarchemd@gmail.com or write to Quest for L’Arche, P.O. Box 1636, Frederick, MD 21702.
Share
Tweet
Pin
PrevNext