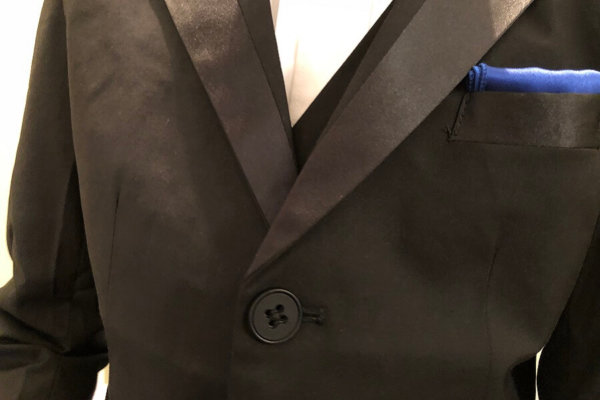 Months ago, our son told me he wanted to wear a tuxedo to his fifth grade graduation.

I’m not a mother who thinks my children need to have everything they want when they want it, but when our 11-year-old asked for a tuxedo, I couldn’t help myself.

We hit consignment shops and Goodwill and department stores. Pickings were slim. We didn’t find anything that was even close to what we wanted. Then life got busy. Our almost-middle-schooler hadn’t mentioned the tuxedo for a while, and I thought maybe it wasn’t a priority.

Then—with just days to go before the ceremony—he asked me whether he would be able to get a tuxedo in time.

It was Sunday evening. I was flying to Chicago the next morning and wouldn’t be home until Thursday evening. The ceremony was Friday morning. There was only one place to go—a place with free two-day shipping and no guarantee that the tuxedo would fit. But it was my only hope.

I searched and searched. Our son didn’t just want a tuxedo, by the way. He wanted one that had a pocket that would hold a pocket square.

Finding an outfit that would fit, not cost loads of money, meet the pocket-square requirements, and arrive in time was suddenly the most important thing on my to-do list. I finally found one for under $40 and ordered it. Then I waited to see whether it would fit.

The night it arrived, my husband called. I was in Chicago, walking next to Lake Michigan on my way to a dinner with my fellow seminar attendees. It was just starting to rain, and the gray sky hung above the lake.

“Did the tuxedo arrive?” I asked my husband—realizing as I did that I may never have mentioned I had ordered one.

“It’s here!” he said. When he came home, our 11-year-old had opened the package and was wearing the tuxedo. It fit perfectly. It would be able to hold the pocket square. All was right with the world.

And there was something else. One of the buttons had been falling off, so our fifth grader had found my sewing box and sewn it back on himself. I didn’t even know he knew how to sew. As it turned out, neither did he. But he has watched me sew and he did a little cross stitching last year. He looked at the holes in the button and figured it out.

There was a time when I didn’t know whether I’d ever be a mother—never mind the mother of a child graduating from fifth grade in a tuxedo with a button he had sewn on himself. When I flew home the night before the graduation, our son showed me a trophy he had won for math and a certificate for a bird box project he’s been helping with since February. I had no idea. I love how he keeps surprising me.

At the graduation, before the ceremony started, my husband turned to me and said something like, “Remember that little boy in Hunan Province?” And I welled up with tears.

I’m just so very proud of this child and so grateful that we get to be on this journey with him.