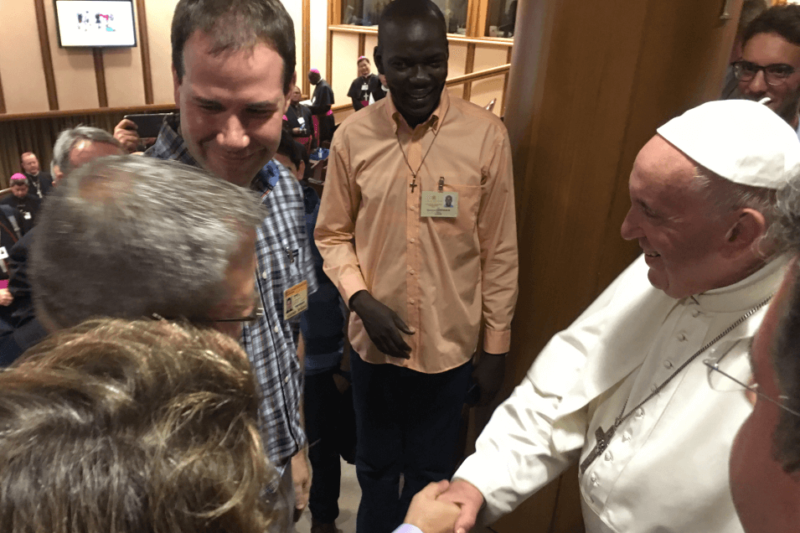 Pope Francis greets Paul Jarzembowski in Rome Oct. 11 during the Synod of Bishops on young people, the faith and vocational discernment. (Sarah Jarzembowski/Special to the Review)

Sometimes the little things show the movement of the Spirit in the most profound ways. I had the opportunity to experience these little profound moments on a recent trip to Rome.

In June 2016, Pope Francis called an extraordinary Synod of Bishops on young people, the faith and vocational discernment. This process has taken two years to get to this point where 260 bishops and 75 auditors and experts are in Rome listening and discussing the needs of young people in our church and the world.

My husband works for the U.S. Bishops Conference in the Secretariat for Lay Ministry, Family Life and Youth. His focus is on youth and young adult ministry, which brought him to Rome for the month of October to serve as a resource for our U.S. synod fathers.

In our 16 years of marriage, there has been an occasion when we have been in separate locations for an extended period. Therefore, I knew I could handle being apart from him for an entire month. However, professionally, I wanted to be there. I wanted to be in the city where the conversations on young adults and the Catholic Church were taking place.

Two days before I left, the opportunity to take photographs as part of the press pool became a reality thanks to the Catholic Review. When I arrived in Rome, I picked up my press credentials at Sala Stampa, the Holy See’s press office, and attended my first press briefing Oct. 11.

Synod conversations take a long break for lunch and rest, returning in the late afternoon with prayer and continued listening sessions with synod auditors – young adults representing all parts of the world and many different vocations.

Afternoon prayer is only about five to ten minutes, and the press is only permitted in for that short period. Once prayer ends, the press pool is quickly ushered out. Even though it was only a short time to be in the room and I hadn’t slept in about 36 hours, I knew the Holy Father was going to be there and I was excited to see even a brief glimpse of him. So, I put on my best suit, walked through security, and entered the press pen to wait to be granted entry.

A member of the Swiss Guard came over to check names and invite us into the synod hall. He looked like a U.S. Secret Service agent in a well-pressed Italian suit and pin on his lapel. There were only four of us in the press pool that day. He showed us where we could stand at the top of the stadium seating in the hall and said we could not go down the stairs or talk to anyone in the seats. However, if someone came up the steps or walked along the back walkway we were permitted to speak with that person.

People milled about and chatted as bishops and auditors arrived. I was focused on getting pictures of our U.S. bishops and Jonathan Lewis, U.S. auditor from the Archdiocese of Washington.

“The Holy Father just walked in,” my husband said to me with a nudge.

It was a surprise because most people in the room didn’t take a second glance. It’s not like when the U.S. president walks in and everyone jumps up to stand at attention. There were no trumpets playing “ruffles and flourishes.” It was just like any other bishop walked into the room to get ready for the meeting at hand.

The Holy Father greeted some people and then looked at his watch and started moving toward the aisle closest to me. As he started to ascend the stairs, I wondered what important bishop or cardinal he wanted to speak with. He kept moving up the stairs, watching each step as he took it. It wasn’t until he reached the top that I realized the important people he was coming to see were the young adults themselves.

He shook Jonathan Lewis’ hand. He told the young adults to “keep making noise.” Apparently, they had been applauding loudly and cheering when they heard something that resonated. That type of response is not something that happens at a synod, but the Holy Father wanted them to keep doing it to let the synod fathers, and him, know what connects with them and what is important. He wanted to keep the conversation authentic and on track.

“This is it,” I thought. “This is my Pulitzer Prize-winning photo opportunity!”

Then I noticed that my husband was right in front of the Holy Father. My husband, who has been working for young adults in ministry for the past 18 years, was eye to eye with Pope Francis, the successor of Peter. They shook hands. I snapped the picture.

Okay, it might not be Pulitzer Prize-winning, but it is profound.

First, in the context of the church and the history of the 15 ordinary synods that have been held, the Holy Father walking to the top of the steps and speaking with auditors had never happened. The Swiss Guard who was keeping an eye on us in the press pool was as shocked as we were by the whole experience.

Second, my husband, who has advocated for young adults throughout his young adulthood and now into his middle adulthood, received an affirmation of his efforts through this simple handshake and smile.

Third, my marriage grew stronger in that moment as I put his experience before my own, not envious or jealous, not pushing through for my own moment, only proud with a heart overflowing with love. That was my Pulitzer moment.

My encounter with the Holy Father reminds me that the Holy Spirit is working in small yet profound ways. The pope’s simple outreach to the auditors showed their importance. His action reminds me that we must do the same with the young adults in our church pews. We must see them as the important people that they are. We must go to them with intention of listening to their stories and getting to know them.

Sometimes all it takes is a smile and a handshake.

Sarah Jarzembowski is coordinator for college campus and young adult ministries for the Archdiocese of Baltimore.