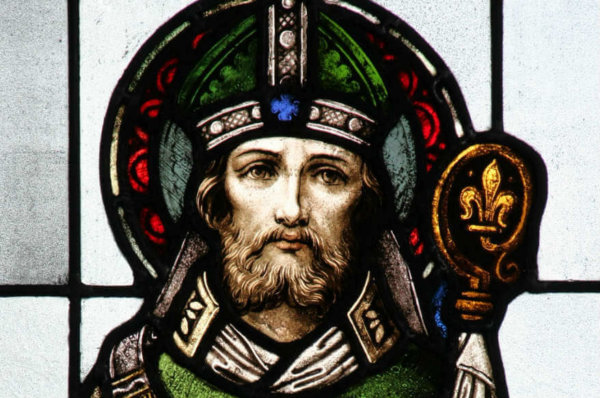 St. Nicholas is depicted in a stained-glass window at Blessed Sacrament Church in Bolton Landing, N.Y. The feast of St. Nicholas -- a fourth-century bishop from the region of modern-day Turkey, well known for his generosity -- is celebrated Dec. 6. (CNS photo/Gregory A. Shemitz)

Every Christmas, we tell our children the legend of St. Nicholas, who put gold coins in the stockings of three poor young women who were unable to get married without a proper dowry. It seems like this simple act of charity is lost on them though as they tear into the candy, gum and toys that fill their own stockings.

To be fair, they are too young to be worrying about marriage. And they still receive gold coins. They just happen to be made of chocolate.

As my wife and I dutifully hung the stockings by the chimney with care this year, it occurred to me that something else has profoundly changed since the time of St. Nicholas. The hearth on which we hang the stockings has become mere decoration.

We don’t have a working fireplace because we use a furnace for heat. This modern convenience, one of many wrought by the Industrial Revolution and electricity, has altered what the hearth symbolizes.

The hearth has always been a symbol for the home. It’s a shorthand for conveying the fact that houses are more than physical structures just waiting to be filled with furniture and nice countertops. They are small societies of human beings working, laughing, fighting, eating and loving together.

The hearth used to serve as a gathering area near the center of the home where warmth and nourishment abounded. For the ancients, the hearth was a mini-temple for offering prayer and sacrifice to the god or goddess who protected the home.

The warmth and nourishment of the hearth came from the heat it provided and the preparation of food that took place in that space. Warmth and nourishment also came from spending time with those we love and feeding upon the stories, conversations and prayers that help us grow closer to one another and to God.

Sometime after the advent of electricity, the function of the hearth began to change. Household warmth came from vents. Food came from the stove. Stories came from the radio, then the television.

For decades, Americans gradually turned away from the fireplace toward the glow of the TV set to imbibe the news and popular stories of the day. Listening to grandfather’s stories about World War I was replaced by finding out what happened on the next episode of “The Lone Ranger” or laughing it up with “Howdy Doody.”

The rituals of radio and television shifted the center of culture from the center of the home to the broadcast centers of the media.

In the early days, when there were only three television networks, Americans could imagine that they were all engaged in a communal experience of viewing the televised world together. The collective experience of watching the moon landing galvanized a nation under the shadow of the Cold War. The assassination of President John F. Kennedy taught the nation how to experience collective grief on a grand scale.

After 9/11, everything changed. The collective experience of TV viewing reached its most tragic and its most poignant when the twin towers fell in New York and two planes crashed in Washington and Pennsylvania. The events of that day coincided with a sea change in media as well. We were entering the digital age, an age in which the fragmenting of culture into finer and finer bits would continue apace.

Our homes are now fractured and fragmented centers of furious activity. There is no central gathering place aside from the dinner table for those families who hang on to the tradition of family meals.

Even the family meal has become less of a reality as the pressure to participate in more school activities, sports and social events has moms, dads and kids sprinting to and from practice and games and recitals.

When there is time to sit and be still, the small screens that occupy our pockets and purses find their way to the front of our faces. No longer centered around a common gathering spot, the family is scattered throughout the home in dens, game rooms, bedrooms and home offices.

Screens are our new common bond. Rather than a bond between family members, these new portable, glowing hearths are attached to us and we to them.

Perhaps we need a new, albeit very different, St. Nicholas. Someone who recognizes our poverty, a poverty of attention and time, and can fill our homes and hearts with something far more valuable than more screens and chocolate coins.

We need something bright, sweet and full of warmth that gives us a sense of communal joy and ultimate purpose. Like a divine babe, born in a manger, to save us all.

Robinson is director of communications and Catholic media studies at the University of Notre Dame McGrath Institute for Church Life. He writes for Catholic News Service.