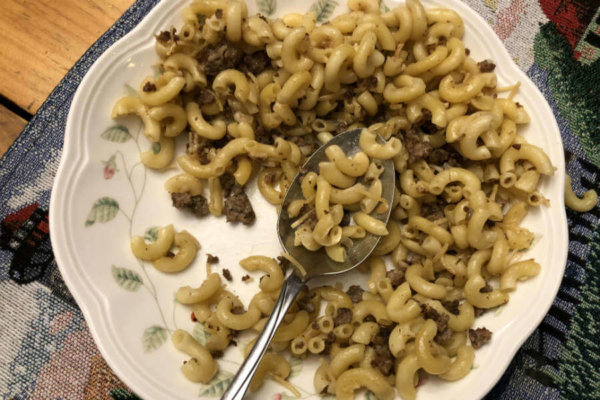 We were in a hurry the other day, scrambling to get to Mass for All Saints Day. I was making one of the boys’ favorite dinners—noodles and ground meat and whatever we have on hand, which we call “slops.”

This pot of slops wasn’t looking very exciting, so I pulled a packet of onion soup mix out of the pantry. Onion soup should be able to jazz almost anything up.

I turned around to take care of something else, and when I turned back to the stove, I ripped open the packet and tossed it into the pot.

Uh-oh. It wasn’t onion soup mix. It was chicken noodle soup mix. Now there were little dry noodles sitting on top of the perfectly decent meal I had already cooked.

There was no time to try to fix it. We had to start eating quickly so we would have enough time to fast for an hour before receiving Communion at Mass.

And chances were it wasn’t going to taste good. But sometimes you have no choice.

So I added more liquid to try to moisten the extra dry noodles I had just accidentally thrown in and cooked it another minute or two. Then I served it up to two hungry children and their hungry mother, and…well…it was fine. It wasn’t bad at all. In fact, one of the boys announced it was his favorite.

It turns out that this version of slops might be the most popular version I’ve made. So there you go.

Sometimes—not all the time, but sometimes—our mistakes work out better than what we had planned. We take a wrong turn and make an unexpected and wonderful discovery. We get caught in the rain and discover the joy of puddle splashing. We put the wrong ingredient in a recipe and it ends up having a terrific flavor.

Even the discovery of penicillin was a mistake—or so they say.

This recipe won’t go down in history. I will probably never make it again, especially since I can hardly remember what else I did to get it to the table. I remember a fair amount of minced garlic was involved.

But I loved the reminder that mistakes don’t always lead to problems. Sometimes things turn out perfectly fine. And maybe we can just relax, rip open that random soup packet, and be open to wherever the journey might take us.