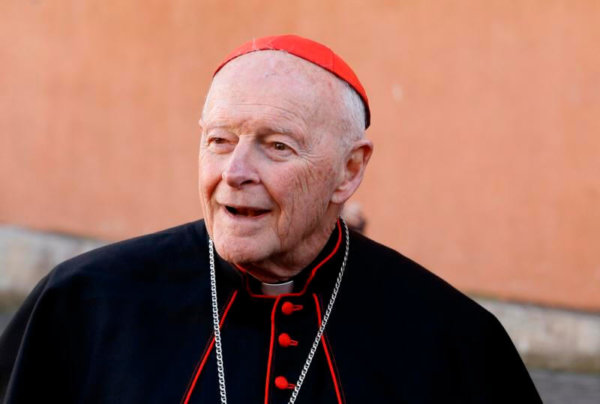 Archbishop Theodore E. McCarrick, retired archbishop of Washington, is pictured during a reception for new cardinals at the Vatican Feb. 22, 2014. Archbishop McCarrick said he will no longer exercise any public ministry "in obedience" to the Vatican after an allegation he abused a teenager 47 years ago was found credible. (CNS photo/Paul Haring)

Catholics are rightly horrified by the reported sexual exploitation of boys and men by Archbishop Theodore E. McCarrick, now resigned from the College of Cardinals. Other church leaders knew of his misdeeds but remained silent and kept advancing him to leadership posts. We even hear of churchmen involved in grave offenses who protect and advance each other in a conspiracy of shame.

In coping with this news, we struggle for a sense of perspective. We have always been a church of sinners, not excluding our highest offices (do an internet search on “Borgia popes”). Somehow the Holy Spirit has kept the bark of Peter afloat so the Gospel of peace, love and reconciliation continues to be offered to the world. G.K. Chesterton once said the church must be divine or it could not have survived such insane mismanagement. But the reform and renewal now urgently needed will be painful nonetheless.

One temptation is to see this as “us vs. them,” the virtuous laity against corrupt bishops. But that’s misguided for two reasons.

The first reason is that we already see good leadership among the bishops. Pope Francis’ immediate acceptance of Archbishop McCarrick’s resignation as cardinal was a pleasant surprise. And at least two U.S. bishops (with more to come, I trust) have said this cannot be seen as “business as usual.”

Bishop Michael F. Olson of Forth Worth, Texas, wrote to the faithful of his diocese on July 28, expressing his horror at these “scandalous crimes and sins.” He said Archbishop McCarrick’s laicization should be considered, and churchmen who knew of his misdeeds and did nothing should be “held accountable” for allowing others to be hurt. He said his policy is to remove priests and others against whom credible allegations have been made, and invite victims and others to report misconduct confidentially without fear of retribution.

Bishop Edward B. Scharfenberger of Albany, New York, went a step further in his July 27 letter to priests, saying that improved policies are not enough. At the root of this “profoundly spiritual crisis,” he said, is “a retreat from holiness, specifically the holiness of an integral, truly human sexuality.” The church’s teachers should recommit themselves to preach what the church teaches on sexuality and to practice what they preach.

Which brings me to the other reason this is not laity vs. bishops. We laypeople are not without sin. The “sexual revolution” of the 1960s, fueled by more effective contraception, was hailed by Americans (including Catholics) as freeing us from fear of pregnancy so we could focus on love. As Blessed Pope Paul VI warned in his 1968 encyclical “Humanae Vitae,” it would free us from commitment so we could use each other for pleasure.

Theologians retooling Catholic morality to suit the spirit of the age found that if sex need not be open to the possibility of new life, it is harder to say it need be between a man and a woman. And a reliance on the conscience of “two consenting adults” (soon expanded to include “mature” teens) forgot how consent can be manipulated, especially when the parties have unequal power (a film producer vs. an aspiring actress, a bishop vs. a seminarian).

By 1977, a committee of the Catholic Theological Society of America published the text “Human Sexuality, New Directions in American Catholic Thought” imbued with the new spirit. Over the protests of the U.S. bishops’ Committee on Doctrine it was used in many seminaries and applauded by forward-thinking clergy and laity. A seminarian resisting sexual advances, based on the church’s traditional teaching, might not be doing his homework.

Ideas have consequences, and for decades some very bad ideas have given aid and comfort to predators inside and outside the church. We sinners have a lot of work to do.